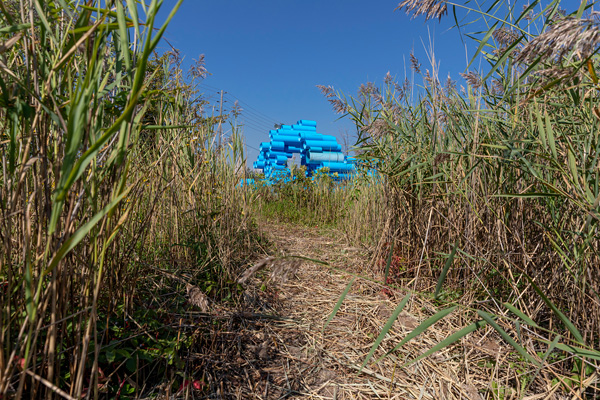 Futurity Island at the Massachusetts Institute of Technology

September 6-26, 2019
Presented by Blackwood Gallery in partnership with MIT Program in Art, Culture and Technology
Curated by Christine Shaw

Futurity Island is an architectural structure conceptualized as a space for acoustic experimentation. It serves as an infrastructure that hosts sound compositions and performances that open space for learning.

Pipe is the primary structural and symbolic unit of the Island, referencing the material that has facilitated worldwide land reclamation throughout the modern era. Once used to drain swamps, pipe becomes a metaphor for a human-centered ecology, an infrastructure of environmental domination and one of the prime symbols of the Anthropocene. In Futurity Island, a network of pipes becomes an artificial skeleton that employs sound to channel what we used to call “nature.” Futurity Island builds a sound infrastructure that brings humans and non-humans into a more symmetrical, collaborative relationship, aiming to transmit and to hear the silenced voices of this planet.

By installing sonic transducers within the structure, Gediminas and Nomeda Urbonas create an organic, reverberating object that creates space for swampy mediations and acoustic experiments—using sound as a quaking force that destabilizes both architectural space and the human misconception that we are “builders of the environment.”

First presented at The Work of Wind: Air, Land, Sea in September 2018, Futurity Island was disassembled into individual pipe sections, and repacked into a single 53’ Musket Transport Ltd. trailer to be trucked from Mississauga to Cambridge, MA. With Futurity Island’s “swamp” making a cross-border transit, the work moves through geographies and infrastructures shaped by human restructuring of natural space—at the Massachusetts Institute of Technology, Futurity Island will be reassembled to animate the local environment alongside the Charles River. At a new site following its first presentation near Lake Ontario, Futurity Island’s pipe serves as a conduit to amplify and reverberate the cultural and environmental histories of each location.

Futurity Island builds on the legacy of MIT’s Center for Advanced Visual Studies’ Charles River Project, a program held in the early 1970s aimed at connecting the campus to riparian environmental concerns. In engaging this history, Futurity Island calls for creative solutions for climate change adaptation, and highlights the challenges and opportunities for future life on and with the water.

The exhibition of Futurity Island at MIT also marks the launch of Amphibian Songs, a 12” vinyl LP conceived by the artists with audio by Nicole L’Huillier. L’Huillier’s composition amplifies the story of the site where this work was first installed—Mississauga’s Southdown Industrial Area—and explores how nature and toxicity relate to each other. In the composition, the sonification of environmental data—the physics of the soil, the components affecting the land, and the winds—create an amphibian song of a distorted land. For full details about Futurity Island, and an excerpt from the Amphibian Songs LP, see the Blackwood Gallery website. 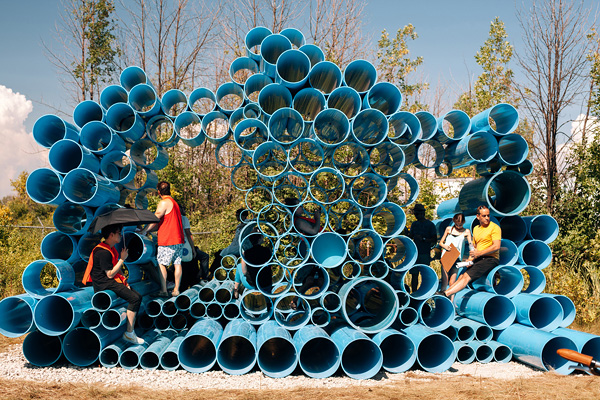 BIOGRAPHIES
Gediminas & Nomeda Urbonas are artists, MIT-based researchers and educators, and co-founders of Urbonas Studio, an interdisciplinary research practice that facilitates exchange amongst diverse nodes of knowledge production and artistic practice in pursuit of projects that transform civic spaces and collective imaginaries. They have exhibited internationally including at the São Paulo, Berlin, Moscow, Lyon, Venice, and Gwangju Biennales, Folkestone Triennial, and Manifesta and Documenta exhibitions (among others). They have been awarded the Lithuanian National Prize (2007); a Prize for the Best International Artist at the Gwangju Biennale (2006) and the Prize for the national pavilion at the Venice Biennale (2007). Urbonas Studio curated “Swamp School,” a learning environment at the 16th Venice Architecture Biennale, 2018.

Tobias Putrih engages 20th century avant-gardes, particularly utopian and visionary concepts of architecture and design, through a range of conceptual and materially ephemeral projects. Putrih deals with artworks as proposals, maquettes, or models—exploratory assertions of radical possibilities, the idea of the monument reconceptualized as something momentary and experimental.

Indrė Umbrasaitė is a Lithuanian-Austrian architect and educator. She is Assistant Professor at the Institute of Architecture, University of Applied Arts in Vienna, Austria, in the Studio Kazuyo Sejima. Umbrasaitė’s individual work explores creative subjective mapping methods within the architectural discipline, aiming to rethink the relationships of body-space, global-local, socio-cultural, and environmental heterogeneity.

Nicole L’Huillier is a sound artist, musician, and architect from Santiago, Chile. Currently she is based in Boston as a PhD researcher at the MIT Media Lab, Opera of the Future group. Her work explores spatial experience, perception, and the relationship between sound and space, based on the idea of sound as a construction material.

ACKNOWLEDGMENTS
Presented by MIT Program in Art, Culture and Technology and the Blackwood Gallery, University of Toronto Mississauga and sponsored by Musket Transport. Funded in part through the Canada Council for the Arts’ New Chapter program. With this $35M investment, the Council supports the creation and sharing of the arts in communities across Canada.

This project is supported in part by an award from the National Endowment for the Arts, the Massachusetts Institute of Technology, the MIT Program in Art, Culture and Technology, the Center for Art, Science & Technology, the School of Architecture and Planning, and IPEX.

Futurity Island, 2018 was commissioned by Blackwood Gallery for The Work of Wind: Air, Land, Sea, curated by Christine Shaw.