This exhibition sparks a visual dialogue between ledger drawings by 19th century Northern Plains warrior-artists and lithographic prints produced a century later by Leonard Baskin (Jewish-American, 1922-2000) and Fritz Scholder (Luiseño/American, 1937-2005) to generate a new critical analysis on history, the politics of representation, image-making and the overall intent of portraiture. It draws together nearly 50 works of art from institutions across North America.

Peripheral Vision(s) invites visitors to consider how the lens of the present shapes our understandings of the past, and how, when we look back, we must activate the largest portion of our visual field—the periphery—in order to see objects, ideas, truths, gestures, and movement outside of our direct line of vision, or, histories not at the centre of the dominant worldview. 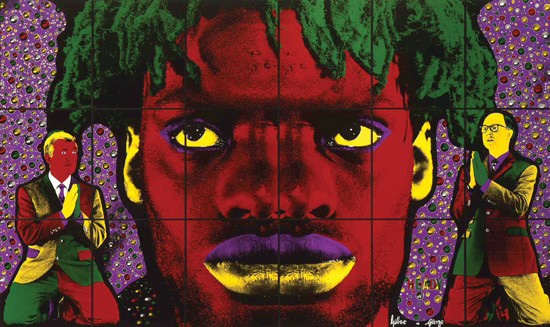 it is from here that the world unfolds: The Levy Collection

A reconsideration of the Herman H. Levy Collection and Bequest spanning five centuries of historical, modern and contemporary art focused primarily on the European canon. Instead of constructing a linear historical survey, individual works and groupings provide points of departure for alternative narratives reflecting transcultural exchange and re-orientations. Presented in recognition of the Levy Collection’s return to McMaster following its cross-Canada tour in the exhibition, A Cultivating Journey highlighting significant artworks donated by the Hamilton businessman and philanthropist in 1984.

Instruments of Exchange: Coins from Antiquity to Today

Because they are instruments of economic exchange, coins contain richly detailed images that provide an assurance of their value. And because they are issued by a political authority, the images represent the community that produced and keep them in circulation. In this way, coins sit at the intersection of economic, political, and artistic interests. Coinage developed a visual language that spoke both to their value and their origin as early as the seventh century BCE. It remained a fundamentally conservative medium throughout antiquity and even beyond: their recognizability is part of their function. The visual language established in antiquity still governs many coins today, with the result that much of what circulates now is indebted to long-lived traditions. This exhibition will present coins from the McMaster Museum of Art and consider their role as instruments of exchange.

McMaster University recognizes and acknowledges that it is located on the traditional territories of the Mississauga and Haudenosaunee nations, and within the lands protected by the Dish With One Spoon Wampum agreement.

The McMaster Museum of Art is fully accessible.