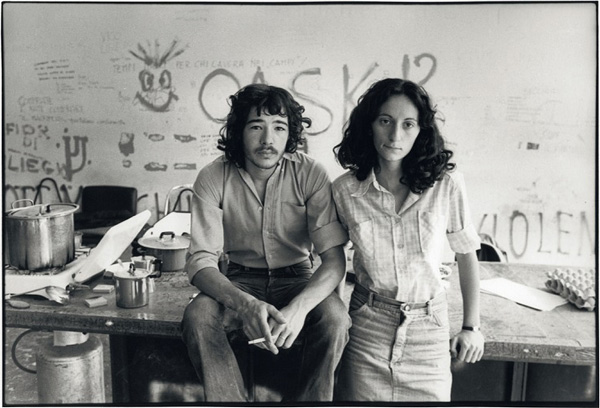 An exhibition featuring the work of 20 Italian photographers, curated by Marco Delogu

“Group identity is a fundamental characteristic of this series: belonging to a group, a place, a historical period, and to very intimate personal stories.”
—Marco Delogu

The Istituto Italiano di Cultura Toronto presents the Canadian premiere of Facing the Camera: 50 Years of Italian Portraits, an exhibition featuring the work of 20 Italian photographers curated by the renowned photographer Marco Delogu. Following presentations in London and New York, Facing the Camera opens in Toronto with a free public reception on Thursday February 13 at 6:30 PM at the Istituto Italiano di Cultura, 496 Huron Street. The exhibition runs until March 27 and gallery hours are Monday to Friday 10:00am – 1:00pm; 2:00pm – 5:00pm. Admission is free.

Facing the Camera documents a wide swath of Italian life between 1968 and 2018 through the eyes of 20 photographers from different generations and regions of Italy. With subjects ranging from humble farmers and shepherds, cross-dressers, students, and nude pacifists to Delogu’s own portraits of prison inmates and Roman Catholic cardinals, these images challenge our assumptions about Italian identity, which has been shaped by its eventful history, fluid borders, and a surprisingly heterogeneous population.

Intensely personal and unflinching in their gaze, the portraits selected for this exhibition portray an Italian reality that is far removed from the glossy dolce vita images usually associated with the country. Each of the subjects looks directly into the camera, inviting viewers to engage in a direct, at times disconcerting dialogue about place, identity, and shared experience.

“I was looking for a series of portraits that started with personal experiences, in which you can sense the story of the photographer and his or her personal and social identity based on a shared homeland, social group, and history,” says Marco Delogu.

Facing the Camera is a group show including works by such photographers as Jacopo Benassi, who recently collaborated with film director Paolo Sorrentino; Gianni Berengo Gardin, one of Italy’s best-known living photographers; Lisetta Carmi, the first photographer to document Italy’s LGBTQ community; Guido Guidi, a modern master whose photographs are “modest monuments to the dignity of the everyday” (The Guardian); Ugo Mulas, whose encounters with Marcel Duchamp and Andy Warhol are the stuff of legend; Moira Ricci, whose work explores the boundary between reality and verisimilitude; Ferdinando Scianna, the celebrated Sicilian photographer; and Paolo Ventura, whose complex, invented worlds have been seen at the Venice Biennale. Visit the Istituto’s website for a complete list of photographers.

ABOUT THE CURATOR
Marco Delogu is a photographer whose research focuses on portraits of groups of people with shared languages and experiences. In recent years his projects have been more focused on nature. He has published over twenty books and has exhibited his artworks in many galleries and museums in Italy and abroad, including Centre Georges Pompidou, Paris; French Academy, Villa Medici, Rome; MACRO, Rome; Warburg Institute, London; Henry Moore Foundation, Leeds; Musée del’Elysee, Lausanne; and PhotoMuseum, Moscow. His photographs are in the collections of many international museums including the National Portrait Gallery in London.

Delogu founded FOTOGRAFIA, Rome’s international photography festival, and Punctum Press. As a curator, he has worked on projects by Josef Koudelka, Sally Mann, Guy Tillim, Alec Soth, Paolo Ventura, Don McCullin, Roger Ballen, Anders Petersen, Graciela Iturbide, among others. Delogu was the Director of the Italian Institute of Culture in London from 2015 to 2019.