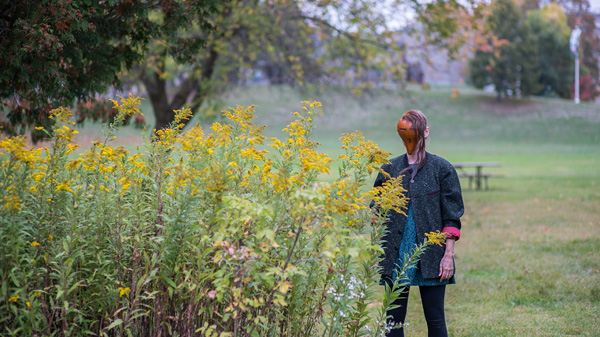 Please join Artspace on Friday, November 1, 2019 from 6 – 9 pm for the opening of enawendewin/relationships, an exhibition of work by Anong Migwans Beam, Ron Benner, Jennifer Cole, David Deleary, and Lisa Myers.

enawendewin/relationships looks to the ancestral gardens of the Anishinaabe as inspiration and as a practical organizing principle for growing gardens today. The gardens created were to be active participants in the project rather than as a plot of land acted upon without their consideration. We worked deliberately and selected the plants grown based on connections to a traditional past while considering our collective future. It was important for us to think of the gardens as entities that we could communicate with and as we developed a relationship to them we wanted to think of the land that the gardens are a part of as our oldest teacher who could still provide teachings for living positively and thoughtfully in today’s world. In ancestral stories of Anishinaabe gardens, it was learned that they designed their gardens so that each plant in the garden was considered in terms of how they related to the whole of the garden, outside the garden, the larger landscape, other beings, and eventually the whole of creation.

About the Participants
William Kingfisher is an independent arts curator, gardener, and Artistic Director of The Gitigaan Project, an art organization that takes gardening and food as starting points for the exploration of decolonization methods, different ways of being in the world, understanding food production as politics, and to examine the interaction between local and global concerns. He is a member of the Chippewas of Rama First Nation, Rama. He has worked as a researcher/curator at the Canadian Museum of Civilization (now Museum of History) (1998 – 2004) and at Trent University, Indigenous Studies Department, Nozhem First People Performance Space as an associate producer (2013). He has an MA in Anthropology from Carleton University (2004) where he wrote a thesis on contemporary Indigenous art in Canada. In partnership with the Art Gallery of Peterborough, one of his recent curatorial projects, Arthur Shilling: The Final Works, (2016 – 2018) toured to five galleries throughout Ontario.

A selection of his recent projects include: Land Power: The Significance of Gardens in Anishinaabe Communities: Past and Present (2018 – 2020), Enaawendewin: Relationships as Methodology in an Indigenous Garden (2018 – 2020); Gitigaan Glyphs: Contemporary Signs for an Anishinaabe Garden (2017); The Two Garden Project: Curve Lake and Peterborough: Strengthening Relationships (2013) which included a garden, visual art and performance in Peterborough and the Curve Lake Reserve; jiigbiig: at the edge where the water and the land meet (2012) a performance and visual art exhibition; and ayaandagon: outdoor art installations in an anishinaabe garden (2010).

Anong Migwans Beam is a painter, mother, paintmaker, curator, living and working in her home community of Mchigeeng First Nation on Manitoulin Island. After studying art at the School of the Museum of Fine Art Boston, OCAD, and Institute of American Indian Arts, she returned home to be a studio assistant for her father Carl Beam. Her painting practice is in large format oil on canvas. She is the founder of Gimaa Radio, Ojibwe Language radio CHYF 88.9fm. She maintains an independent curating practice, and served as director of the Ojibwe Cultural Foundation, before leaving to focus on her own practice and the art of paintmaking. She has always loved the colors pink and green more than anyone should, she collects art, makes art, and is generally obsessed with all aspects therein. Currently preparing for an exhibition of her oil on canvas work history of painting at the John B. Aird Gallery Toronto.

Ron Benner is an artist, gardener and activist based in London, Ontario. He is a survivor of Agricultural Engineering, University of Guelph 1969/70. His mixed media photographic installations are in public collections including the National Gallery of Canada, Ottawa, the Art Gallery of Ontario, Toronto, Museum London, London, Ontario, McIntosh Gallery, The University of Western Ontario, London, Ontario and the Casa de Las Americas, Havana, Cuba. He is the recipient of numerous awardsincluding The Canada Council for the Arts, the Ontario Arts Council and the Chalmers Arts Fellowship. He was appointed adjunct research professor in the Department of Visual Arts, Western University, London, Ontario in 2012.

Jenn Cole is a mixed-ancestry Algonquin Anishinaabe-kwe and Assistant Professor in Gender and Women’s Studies at Trent University. She researches Indigenous Performance as it intersects with settler/Indigenous relations and reciprocal relationship to the land, especially at the site of the Kiji Sibi/Ottawa River in Algonquin Territory.

Her older work focuses on the cultural history of hysteria and the hysterics’ modes of resistance to misogynist medical spectacle. Book coming soon! Her other published writing is about the political force of inarticulacy, the activist elements of intimacy created by imperfect storytelling, Indigenous feminist methodologies and feminist performance adaptations. Her current performance practice explores storytelling, autobiography and sharing food together as an expression of vulnerability and relational exchange that is pivotal as we try to cultivate a sense of who we are in relation.

In programming, curation, publication, public talks, teaching and performance, she works to create experiences that enable participants across generations to decolonize their relationships to place and one another through multi-arts practices. She is Creative Director of the Aging Activisms Research Collective; Co-Investigator in the SSHRC-funded partnership development project, Gatherings: Archival and Oral Histories of Canadian Performance; Co-Conveynor of the Indigenous Performance Research in the Americas Working Group for the American Society for Theatre Research; and editor of Gatherings, a publication for the collection and distribution of creative scholarly work in performance. She has conducted arts, workshop and performance scholarship programming for events like Precarious Festival, the national Canadian Association for Theatre Research conferences (2017, 2018); Stories of Resistance, Resurgence and Resilience in Nogojiwanong/Peterborough: Aging Activisms Intergenerational Storytelling Workshops (2018); Impossible Projects Symposia (2016, 2018); The Future of Cage: Credo conference (2012) and Polyphony (2005-7).

David Deleary is member of the Ojibway First Nation of Bkejwanong, also known as Walpole Island located in southern Ontario. Currently a resident of Toronto, David is a musician and composer as well as a music producer and sound designer. With over 40 years of experience as a musician, David studied music composition at the University of Arizona and has performed in ensembles ranging from traditional Native drum groups to choirs, rock, country & blues bands, jazz groups and metropolitan orchestras. He is also a songwriter as well as a music producer and recording studio engineer.

Some of his songs as well as his bass playing and backing vocals can also be heard on albums by Donna’s Boy, Cliff Cardinal & The Skylarks, Jacques and The Shakey Boys, Nadjiwon, Donne Roberts, Cheri Maracle, Derek Miller and Seventh Fire.

He composed a vocal motet, “Inter Caetera (Dudum siquidem) – 1493” as part of his collaboration with installation artist Bonnie Devine on the work entitled La Rabida: The Soul Of Conquest: An Anishinaabe Encounter exhibited at the Art Gallery of Peterborough in the autumn of 2016.

Lisa Myers has a Master of Fine Arts in Criticism and Curatorial practice from OCAD University. She is a member of Chimnissing, Beausoleil First Nation and Assistant Professor in the Faculty of Environmental Studies, York University. She is an internationally recognized artist and curator with a research focus on Contemporary Indigenous art and curatorial practice with a keen interest in interdisciplinary collaboration. Her recent curatorial projects include four touring exhibitions. International recognition of her work includes invitations to participate in exchanges. The Canada Council of the Arts in 2016 invited her to participate in a Tri-Nation International Exchange with Indigenous curators from Australia, Aotearoa/New Zealand, and Canada. This exchange will continue with the 2019/2020 launch of the anthology Becoming our Future: Global Indigenous Curatorial Practice. Her writing has been published in exhibition publications, art publications and peer-reviewed anthologies and journals including Reading the Talk, C Magazine, Inuit Art Quarterly, Senses and Society, and Public, Myers’ interdisciplinary collaborations through her diverse art practice includes printmaking, animation and participatory community-engaged projects. Through socially engaged art, she creates gatherings that respond to place. Her projects often include sharing berries and other foods indigenous to the Great Lakes region, in this way she shares and reflects on underrepresented histories and knowledge exchange. Her recent curatorial projects consists of: Beads, they’re sewn so tight (2018); Post Script (2018); Carry Forward (2017); Wnoondwaamin|we hear them (2016); and Recast (2013). Major projects include: 2019- With Co-investigator with Professor Sheila Colla on the project Finding Flowers: A biocultural and interdisciplinary approach to pollinator conservation through ecology, art and pedagogy. Finding Flowers is a research project that cultivates Mi’kmaq artist Mike Macdonald’s extensive study of the profound relationships between pollinators, medicine plants, Indigenous plant-food networks and extractivist industries. Finding Flowers mobilizes spaces for cross-pollination between environmental matters, Indigenous artistic practice and biocultural research on native plants and pollinators.