Dylan Miner: These Conditions Can Be Changed 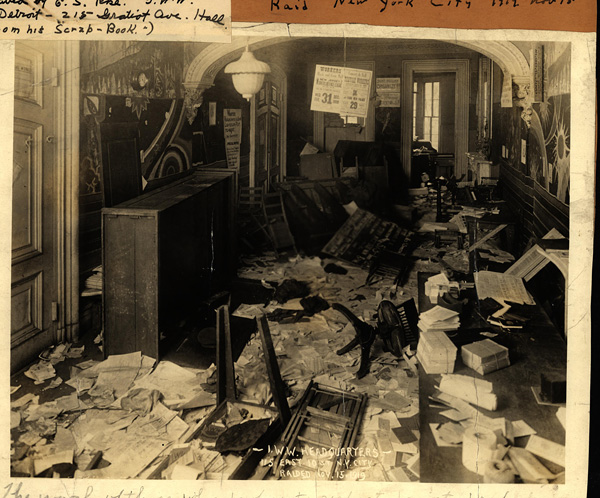 THESE CONDITIONS CAN BE CHANGED
Dylan Miner

For his exhibition at the Workers Arts & Heritage Centre, artist Dylan Miner builds upon his recent work printing early-twentieth century graphics of the Industrial Workers of the World (IWW), as well as his previous time as a Wobbly himself (X355025). To date, Miner has previously created other solo exhibitions that engage with IWW histories, including one at the Museum of Contemporary Art Detroit (MOCAD) in 2017.

The poetic title to this exhibition – “These Conditions Can Be Changed” – borrows its title from the Preamble to the IWW constitution. Central to his practice as an artist, Miner engages in extensive archival and historical research, often rearranging and re-imagining fragments of historic documents as banners and signs that combine text and image. For this exhibition, Miner has created a new body of work that sits in dialogue with IWW histories, texts, and images, while speculating a moment in which we have collectively changed the conditions of our shared future. By simultaneously working across multiple temporalities (past, present, future), Miner merges his artistic practice with Wobbly histories to imagine a gallery in the shell of the old.

Dylan Miner is an artist, activist, and scholar. He is Director of American Indian and Indigenous Studies, as well as Associate Professor in the Residential College in the Arts and Humanities at Michigan State University. Miner sits on the board of the Michigan Indian Education Council and is a founding member of the Justseeds artist collective. He holds a PhD in Arts of the Américas from The University of New Mexico and has published extensively.

In 2010, he was awarded an Artist Leadership Fellowship from the National Museum of the American Indian, Smithsonian Institution. Miner has published and exhibited extensively. His book Creating Aztlán: Chicano Art, Indigenous Sovereignty, and Lowriding Across Turtle Island was published by the University of Arizona Press. In the past two years, he has published four risograph books: an artist’s book titled Aanikoobijigan // Waawaashkeshi, a booklet on Métis and Anishinaabe beadwork, a chapbook on quillwork, and a poem-book titled Bakobiigwaashkwani // She Jumps into the Water. In 2017, he commenced the Bootaagaani-minis ∞ Drummond Island Land Reclamation Project and this summer gifted two other limited-edition artist-books at the Drummond Island Homecoming. In 2018, Miner began collaborating to print little-known graphics from the Industrial Workers of the World (IWW).

Join us for a slate of winter programs in support of These Conditions Can Be Changed, including an exhibition tour, a two-day workshop, a screening, and more. Keep an eye on our website for more information in the coming weeks.

This exhibition is the outgrowth of a 2019 Hamilton residency Dylan Miner took part in organized by the Workers Arts & Heritage Centre, with the support of Centre[3] for Art and Social Practice.

WAHC wishes to acknowledge the Ontario Arts Council, the City of Hamilton, the Province of Ontario, CUPE, CBTU, and the Canada Council for the Arts for their support of our main gallery exhibitions, and their ancillary programs. 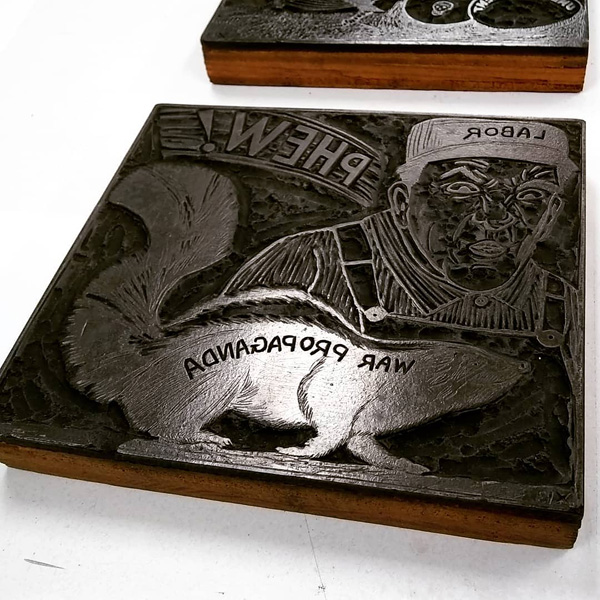 One Big Union: The Revolutionary Graphics of the IWW

Join us for a rare look at graphic art created from original print blocks produced by the Industrial Workers of the World (IWW).

The Industrial Workers of the World was founded in Chicago in 1905. Its members, also known as Wobblies, considered themselves revolutionary industrial unionists, fighting against employers and the state, as well conservative mainstream trade unionism.

This exhibition provides a glimpse into the radical graphic language of the IWW. These prints were made from original print blocks and illustrations by Wobbly artists, used in the publications of the Industrial Workers of the World from the first decade of the 20th century into the 1960s. The exhibition will feature prints, print blocks and selected IWW ephemera and publications from the collection of Bryan Palmer.

The Workers Arts & Heritage Centre is a fully accessible building.

Image (below): Relief print block carved by X13 (C.E. Setzer) from the collection of Bryan Palmer.