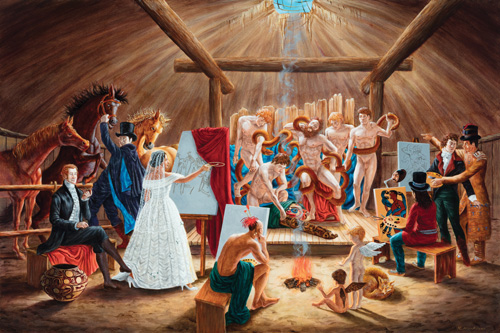 Waddington’s is pleased to present this expertly curated and eclectic collection of over 138 works of Canadian art in our November 18 auction.

The range of the auction is exemplified by: an evocative work by Kent Monkman, Study for the Academy; a powerful portrait by Robert Harris of Pîhtokahanapiwiyin, known as Chief Poundmaker; and two extraordinary works on canvas by internationally renowned Jean Paul Riopelle, Trompette and Sans Titre.

This diverse auction includes a cross section of graphic works, sculpture and textiles, from across the regions, and generations.

View the Galleries and Register to Bid: https://www.waddingtons.ca/auctions/

About Waddington’s
Waddington’s is Canada’s most diversified provider of auction and appraisal services, conducting live and online auctions of Asian, Canadian, Inuit and First Nations, International and Contemporary Art, as well as Decorative Arts, Fine Jewellery and Fine Wine & Spirits.