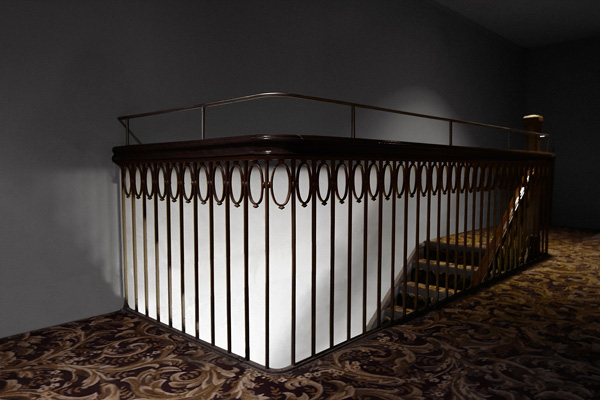 This exhibition presents an ensemble of photographic projects in which individual and collective memory become entangled in magnificent yet somewhat disturbing images. Écrins Écrans presents around forty spare, frameless prints, from a series of colour photographs taken by Grauerholz beginning in 2001. That was the year she produced Privation, a major project that documented the charred remains of her library which had burned in a house fire. A lamentation over the loss of her book collection, Privation also symbolically marked her complete transition from analogue to digital photography.

In her earlier work, Grauerholz resisted optical precision and referential clarity. She used black and white or sepia monochrome to allude to the past with numbed awareness, resulting in a critical distance that precluded identifying too closely with the subject matter. In contrast, this recent work redefines places of remembrance, longing and intimacy with a sort of now distant eye, as if the photographer had lost some privileged, sensitive, or even tactile relationship to the object of her gaze. Here, the relations between architecture and decoration, places of passage or waiting, and devices to conceal or reveal invite us to take a look while at the same time forbidding us access. In each of these images, something emerges from the past, from a personal story and from the collective memory. But what is striking in those protected spaces is that although you can write, imagine or project anything on their surfaces – walls, screens, floors – they keep us firmly on the doorstep. This proximity is all the more uncomfortable precisely because we are prohibited from entering and seeing close up.

The exhibition title Écrins Écrans is a homophonic pun in which the meaning of two similar sounding words with different meanings resonate in unexpected ways. Écrins translates as a small boxes or cases, écrans are screens. Beyond the most literal interpretation of the camera as a box for holding memories, and the photographic print being a screen onto which that memory is projected, the words evoke an array of other meanings and associations in relation to what is hidden and what is made visible.

About the Artist
Born in Hamburg, Germany, in 1952, Angela Grauerholz has lived in Montreal since 1976. A graphic design graduate of the Kunstschule Alsterdamm, Hamburg, she also studied literature and linguistics at the University of Hamburg and holds a master’s degree in fine arts (photography) from Concordia University, Montreal. Since 1988, she has been teaching at the École de design, Université du Québec à Montréal, where she was the director of the Centre de Design from 2008 to 2012. In 1990, she received the Award of Excellence from the American Federation of Arts, New York, for designing the book Lisette Model, published by the National Gallery of Canada. In 2015, Angela Grauerholz received the prestigious Scotiabank Photography Award, and in 2016, a major book on the complete work of Angela Grauerholz was produced by German publisher Steidl.

Grauerholz has participated in many international events of distinction, including the Biennale of Sydney, Australia (1990), documenta IX, Kassel, Germany (1992), and the Carnegie International, Pittsburgh, USA (1995). Solo exhibitions of her work have taken place at the Kunstverein, Münster (1991), the MIT List Visual Arts Center, Cambridge, Massachusetts (1993), and at the Contemporary Arts Museum of Montreal in 1995, before travelling to Hannover, Zug and Zurich (1995-96). Her Privation series of photographs was exhibited as part of the Biennale de Montréal (2002) and presented the same year at the Contemporary Art Gallery, Vancouver.

In 2010, the National Gallery of Canada in collaboration with the Canadian Museum of Contemporary Photography (CMCP) mounted a major exhibition of her work which was subsequently shown at the University of Toronto Art Centre in 2011. In 2006, Grauerholz was awarded Quebec’s Prix Paul-Emile Borduas for her accomplishments in the arts. Today, she continues her photographic work and takes part in archival projects as well as cinematographic productions. Her latest film short, Appassionata, was made together with Réjean Myette and New York composer Melissa Grey. Angela Grauerholz is represented by Art 45, Montreal, the Olga Korper Gallery, Toronto, the Thomas Schulte Gallery, Berlin and the Françoise Paviot Gallery, Paris.