One could say an inciting incident atop a California mountain following a personal tragedy in which the artist, while viewing the land and sea below and connecting the locations he had visited with stars above, was where it all began. This was the late 1960’s and although Andrew James Smith had always been deeply fascinated by repetitive patterns in geometry, it was this pivotal moment that finally forced pencil to paper. He was the kid who received both art and science awards in junior high school and this was the mathematical construction of one shape in particular that he would devote much of his practice.

Coined ‘Protogon’s Spiral’ by the artist in 1968, Andrew’s design would become seminal to his body of artwork. Armed with this portfolio of drawings he would earn himself an artist in residence at the Coach House Press in Toronto. There he worked diligently with paper and developed paper-making techniques that would attract a faithful following of such notable personages as author Margaret Atwood, artist Norval Morrisseau, and poet Allen Ginsberg. During that time, Andrew devised a method of photographic watermarking that would garner him a key to Massey College at the University of Toronto and earn him the nickname the ‘Papersmith’.

Despite a clear focus on paper arts for much of the 1970’s, Andrew could not ignore the strong pull towards geometrical art. By 1980, he had made pencil drawings of nearly 300 topological variations of his seminal protogon design whereby he reworked, reconsidered, and eventually repositioned the equal length sides. In some cases the apexes aligned while in others they had one side parallel. As an artist, he equated these two options to musical “sharps” and “flats”, akin to a “gender” difference, and continued to apply them to subsequent variations. Interestingly though, the Protogon’s first official unveiling would not happen until a pop-up show in Cambridge, Ontario in 2014. He had shown prints of it years before in the University of Waterloo School of Architecture print studio, in the office of the Cambridge Galleries, and more recently at the 2016 JMM Exhibition. At times Andrew would even find himself having to defend the design as his. ‘Mathematica’, a guidebook for graphics, and ‘Mathworld’, an online encyclopedia, were both guilty of describing Andrew’s particular spiral arrangement but attributing it to another author. Unarguably Andrew’s work would bridge the gap between art and math and for many took on an otherworldly appeal. 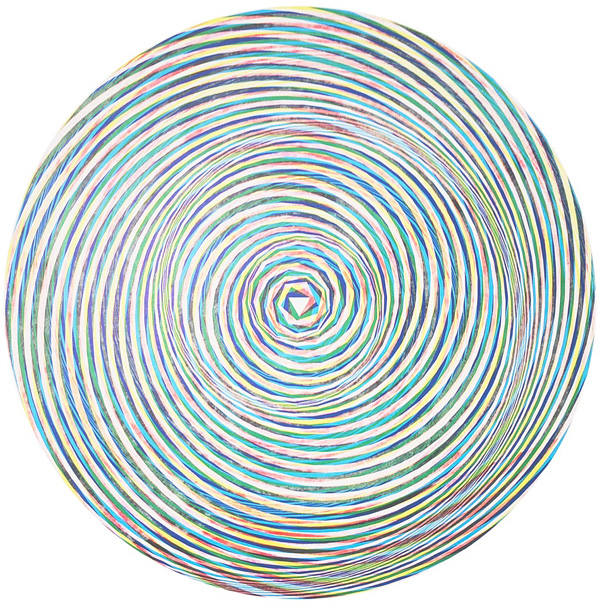 Andrew attended the California College of Arts and Crafts on a full scholarship. While working at the Coach House Press and teaching papermaking at Massey College he also represented Canada at the 1st Handmade Paper Conference. He was represented by the Isaacs Gallery, Geraldine Davis Gallery, and Gallery Moos, exhibiting in Germany, Brazil, and as far away as Japan. His art can be found in major public collections such as Cambridge Galleries, the Art Gallery of Ontario, and the National Gallery in Ottawa. He has received many awards and was featured in The Globe & Mail, Quill & Quire, Maclean’s, TVO, and FashionTV.

Escape Portals, currently on exhibit at Langdon Hall, studies Andrew’s ‘Protogon Spiral’, this geometric shape he created, and its efflorescence repeated throughout his work. Though complex, the Protogon Spiral finds beauty in its infinitude and can stupefy even the most inquisitive of minds. Intricate brush strokes, sublime use of colour, enormity, and sheer scale of repetition leave admirers pondering their own existence.

Taste of Art is an innovative and multisensory approach to admiring art that combines the masterful talents of Andrew James Smith with the culinary artistry of award-winning Chef Jason Bangerter. This thought-provoking experience will leave guests’ minds and taste buds reeling. The event will begin with a cocktail reception hosted by the artist overlooking the resplendent gardens of Langdon Hall, and followed by dinner where guests will be surrounded by Andrew’s current show ‘Escape Portals’. A three-course menu with wine will be presented whereby the Chef finds inspiration for each course in the complex and captivating works of art. Join Andrew and Jason as they walk participants through the presentation of each dish as it corresponds with the paintings and learn in more detail how Andrew creates works of such intricacy. Dinner tickets are $150 (including HST + gratuity) and overnight accommodations are also available. Please call 1-800-268-1898 to purchase or visit our website for more information. 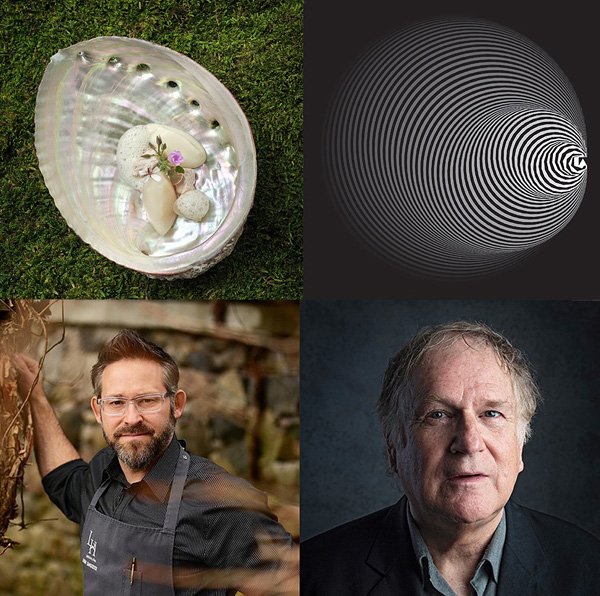 This event is fully accessible by all. Please email the Gallery Director Jennifer Houghton for more details.