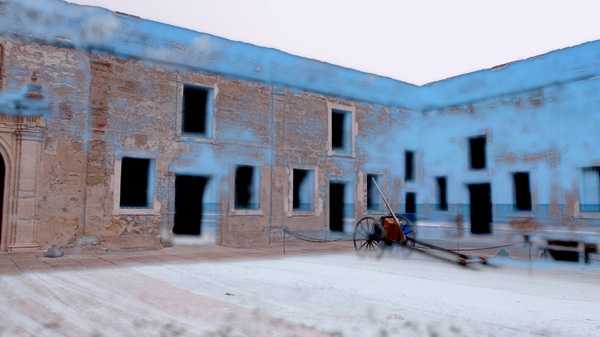 This winter, the Art Gallery of York University (AGYU) presents Around the Edge of Encircling Lake, a solo exhibition of recent works by Sky Hopinka, alongside a film program curated by the artist entitled What Was Always Yours and Never Lost. The exhibitions open with a free public reception on Wednesday, January 15, 6 – 9 pm and continue through to March 15, 2020.

The framework for AGYU’s winter programming season is Archives of Futurities. Existing within a continuum that negotiates histories of the past and their relevance for the future, the films in this exhibition are both rigorous and expansive. Taking a poetic approach to experimental cinema, Sky Hopinka’s films draw together stratums of experience, presence, temporality, and memory. Hopinka writes “I think about how I can express those parts of my relationship to my identity and culture without being overly didactic. All those layers are still there—not to confuse the audience but to add more information. More information means more complication, I believe; but I’m interested in the idea of complication without confusion, and how relationships between different elements can generate emotion.”

Further broadening the circle of perspectives, this exhibition is the first of several this year at the AGYU where artists have invited other artists. On view concurrently, What Was Always Yours and Never Lost is the most recent iteration of a film program curated by Hopinka, focusing on Indigenous experimental cinema that first began in 2016.

Sky Hopinka: Around the Edge of Encircling Lake

Artist and filmmaker Sky Hopinka’s work centres around personal investigations of Indigenous homeland and landscape, designs of language as containers of culture, and the play between the known and the unknowable. This exhibition brings together a selection of Hopinka’s recent films and related artworks. Weaving together experimental and documentary practices, these films explore diverse yet interconnected topics, taking up land (and landscape), language, music and memory.

Sky Hopinka (Ho-Chunk/Pechanga) was born and raised in Ferndale, Washington, and is currently based between Vancouver, BC, and Milwaukee, Wisconsin. Hopinka was most recently a fellow at the Radcliffe Institute for Advanced Study at Harvard University and Sundance Art of Nonfiction Fellow for 2019 and is currently an Assistant Professor in Film Production at The School for the Contemporary Arts at Simon Fraser University, Vancouver. Curated by Clara Halpern, Assistant Curator, AGYU.

This screening program of works of other artists and filmmakers is curated by Sky Hopinka. Following screenings at Yale Union (Portland, Oregon) and The Whitney Biennial (New York) it is the most recent iteration in an ongoing series. Hopinka writes: “Here you have a number of films from a number of makers that come from different backgrounds, different countries, different homelands, and different nations. Each making works that traverse a wide range of topics dealing directly and indirectly with Indigeneity— assertions of identity and presence in the face of and regardless of colonial history and outdated traditions of anthropology and ethnography. They make space for poetry, for beauty, for movement between cosmological and visceral worlds, sometimes blurring the lines between both. They claim what was always theirs and celebrate what was never lost.”

homemade satellite dishes explores media and censorship in the domestic sphere. In regions where governments seek to control and restrict citizens’ knowledge, satellite dishes are often banned as communication devices. Nevertheless, they are often installed using camouflage to conceal their presence in public space, thus avoiding confiscation. In this installation, artist Elham Fatapour mines the connection between satellite dishes, concealment, textiles, and domestic spaces. Elham Fatapour was born in Tehran, Iran, and is currently a Toronto-based artist and a student in the York MFA program.

We are revisiting a work of Adam Kinner from 2014–15, Recording the Weather, which saw him performing daily saxophone improvisations as a form of documenting that day’s weather. As he had written on this work at that time, “These are not songs. They are a way of accounting for what time does to us. The effect it has, the tithe it takes.” On one set of headphones, a selection of these older diaristic solos are found, while on the other, newly recorded daily interpretations of the weather (now informed by our heightened awareness of the ever-changing climate) are presented. Born in Washington, DC, Adam Kinner is an artist living and working in Montreal.

For more information or to request images or interviews with the artists, please contact Emelie Chhangur, Senior Curator at emelie@yorku.ca.