When Raven Became Spider is what happens when the colour splash visuals of a graphic novel are transformed into an all-encompassing installation for the gallery. This (and a lot more) is what you get when you visit the exhibition currently on display at Gallery 1C03. Although the experience of reading along with images can transport us into the imagined world on the page, through this installation that same world is heightened and activated by its sheer physicality. Mixed into this comic universe are a range of characters invented by a line-up of artists that includes Joi T. Arcand, Sonny Assu, Julianne Beadin-Herney, Shaun Beyale, Elle-Máijá Tailfeathers, and Jeffrey Veregge. 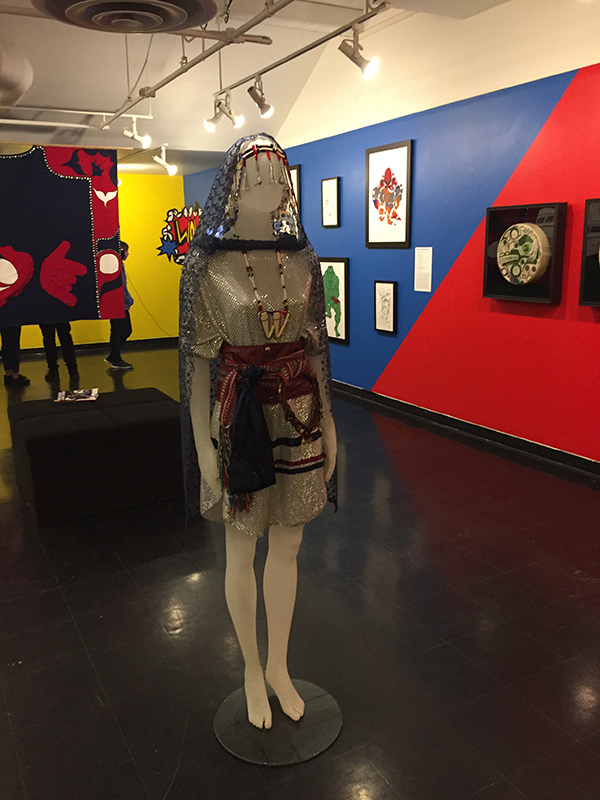 Imagery that would typically appear in the flat print pages of a comic book are indexed through sculpture, video, mural, textile, and framed image-based works. And unlike the sequential narrative arc of your traditional comic strip, a one-to-one plot is put to the side and in its place each artist brings their own textured viewpoint to the table. There isn’t a clear hero or villain – nothing is made that simple in the very human and superhuman perspectives shared. Instead, the artists choose the fictional playground of the comic book along with its attendant histories for zeroing in on societal and cultural inadequacies to surface their own voices in the present.

Each artist takes up the easily comprehensible images and vocabulary of the comic medium to either disassociate from its known context or highlight their own alternate heroes. In Assu’s case, this included illustrating Spiderman imagery with Kwakwaka’wakw traditional design in his blanket and deer-hide drum pieces. In Arcand’s memoiristic work, these hero’s includes the women in her family as well as queer, non-binary, two spirit bodies in her Beautiful NDN SuperMaidens series, which is a riff off a found burlesque ad from 1899 titled the Beautiful Indian Maidens. In Beyale’s towering framed-image, the heroes he foregrounds are Navajo women and tradition mythical characters in Navajo fables rendered in the recognizable thick black outline of comic graphics. And in Tailfeathers’ live action video Red Girl’s Reasoning, starring a female bounty hunter, Indigenous women are upheld as gatekeepers and victors.

It is ultimately effective to think of this ensemble as constructing new worlds and atmospheres by means of the euphemistic portals of the graphic novel. It is a means of broadcasting their individuality and community through the lively surfaces and associated cultural history.