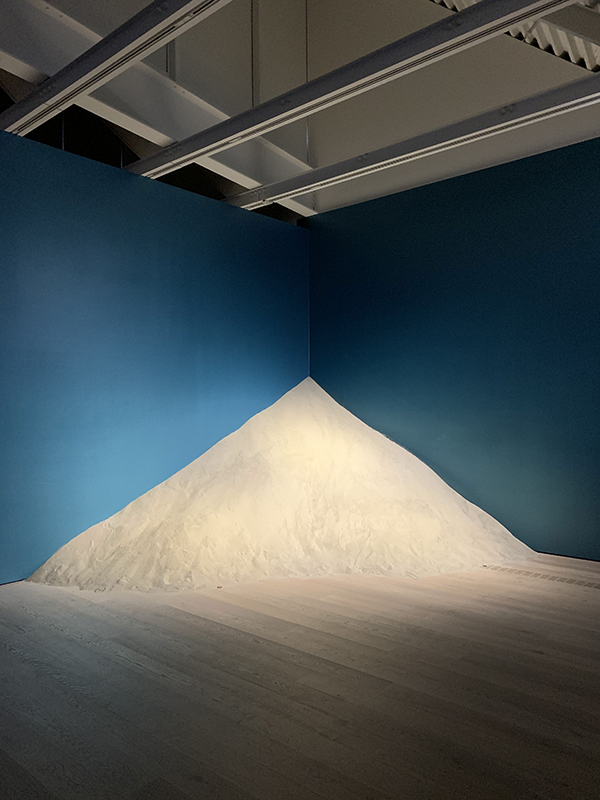 The cavern-like gallery space enhanced the hyper-saturated blues, purples, and greys of the looping 4k-channel video, sharing space with the massive pile of sand that interred the far corner of the gallery, and the jewel-toned sculptures and drawings, staging a fascinating opposition between grace and scale that maintains a throughline with Shawky’s work in another trilogy, Cabaret Crusades, programmed in tandem with the exhibition. My visit was accompanied by the trilogy’s third installment Cabaret Crusades: The Secrets of Karbala, which dramatizes the final years of the Crusades through exquisite hand-blown Murano glass marionettes who commit extreme violence and betrayal. My entire review could centre on this film alone, where fragile glass figures wield the power of empire. In one particularly difficult scene, a towering pile of dying prisoners are stabbed repeatedly by their captors and small strings elicit minor agonized movements as life slips away. The smooth faces of the aggressors are beautiful and still, their faintest expressions revealed only by their moving glass eyelids, provoking beauty and wonder where horror would otherwise be.

Juxtapositions abound throughout Shawky’s work. Al Araba Al Madfuna explores oral myths from the village of the same name. Each video tells a parable from the storyteller Mohamed Mustagab’s Tales of Dayrut, stories situated from the Temple at Osirion, now Abydos, Egypt. These videos ponder the tradition of storytelling through the slow reinvention that comes through repetition. The looping Al Araba Al Madfuna III tells Mustagab’s short tale Sunflower, a story of village obsession that creates a treasure of the sunflower seed in the form of a miraculous cure that takes on a significance eclipsing all else. Children perform in the roles of adults, cloaked in traditional garb, turbans, and facial hair. The densely saturated colours makes this hard to see at first, but their smallness is revealed in their bodies’ movements when they clumsily travel the desert as a group. As in The Secrets of Karbala, the inclusion of children lends a lighthearted contradiction, pressing viewers to explore these fresh but inelegant performances as the richer story unfolds. 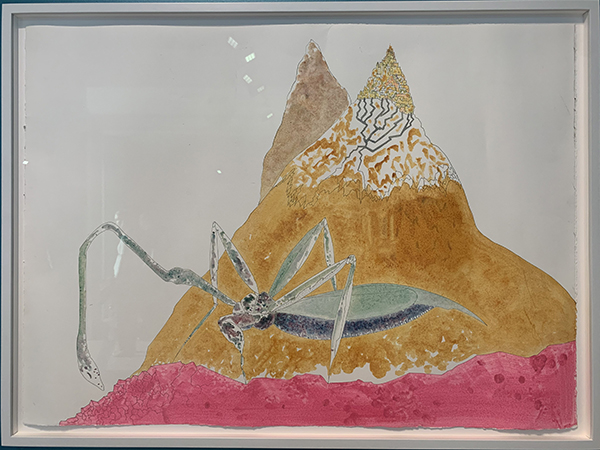 The drawings and sculptures that accompany these films extend Mustagab’s myths by translating the stories into imaginary hybrid characters. Mixed human-non-humans are rendered in rich jewel tones and light graphite line, pointing again to Shawky’s deft use of contradiction and fantasy, where puppets, children, and creatures tell the stories of history. It is a technique that begins, as with most histories, with a large event, but creates space for small things to emerge through close, fascinated observation. The fantastic lends a far more factual version of history, where, as Carolyn Christov-Bakargiev writes, “the puppet is more truthful,” unfolding history as a series of small but meaningful dialogues, alight with both beauty and tragedy.

Wael Shawky: Al Araba Al Madfuna was on display from October 17 to January 12.
The Polygon Gallery: https://thepolygon.ca/
The gallery is accessible.