Vision Exchange: Perspectives from India to Canada at the Winnipeg Art Gallery

Yes, exhibitions centering on nationality as their modus operandi are archaic leftovers at best, but before we start decrying, one upside is they spotlight art communities from countries that typically receive inadequate consideration, especially within Western-centric museum programming. In Canada, Indo-Canadians or diasporic East Indians make up the second largest non-European community next to Chinese Canadians, so it is more than appropriate that the touring group exhibition Vision Exchange: Perspectives from India to Canada make a stop at the Winnipeg Art Gallery.

The unifying edifice of nationality dissipates as you make your way through the exhibition. Even before you pass through the doors housing the motley of works, you are loudly greeted by one of Divya Mehra’s sassy, acerbic text pieces. Towering all-caps bolded-font vinyl in an “Indian Tan” Pantone read: I’M INDIAN, SO I’M IN THIS SHOW. This tells you everything you need to know about where she’s at with exhibitions like these. If you are less cynically inclined, you can also consider this a statement that, apart from every participant sharing a genealogical relationship to India, there’s very little that tie them together. Each of the twenty artists (almost all of them alive and still practicing) come at their work from intricately idiosyncratic directions. 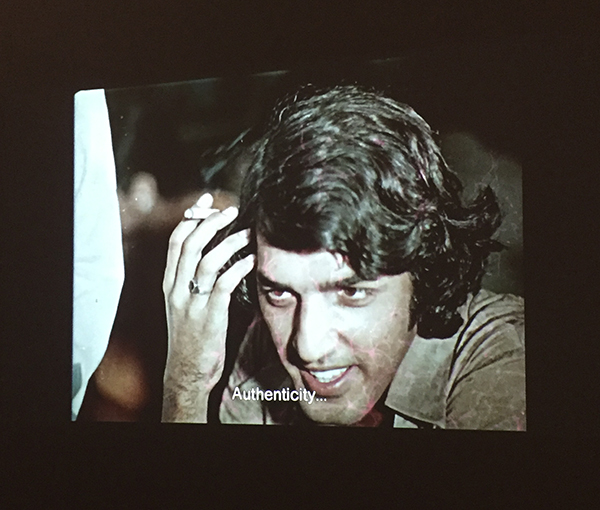 Of course, the attuned critical minds tug at societal ills from a local context. In a variety of ways, we see Gauri Gill, Shilpa Gupta, Amar Kanwar, and Sarindar Dhaliwal point at the social, geopolitical, and environmental conditions they find in their homes in either India, North America, or elsewhere. You also have those (Sunil Gupta, Dayanita Singh) preoccupied with the past, be it personal or collective. And then there are artists who for decades have had their stately influence on subsequent generations.

At 91, avant-garde filmmaker, painter, and legend Akbar Padamsee is the oldest amongst the assembled artists and a highlight of the show. His contribution is a sprawling room-sized installation that includes his film Syzgy as well as fragments of preparatory sketches and a set that could be his work studio. You can see reverberations of his influence in the selection of works by Bharti Kher, as well as Jagdeep Raina’s mixed-media works and Atul Dodiya’s photo/painting combos. Padamsee’s impact also comes through in Thukral & Tagra’s engulfing, colour-saturated paintings, light, and video installation (a standout piece that moves us to respond both physically and emotionally). 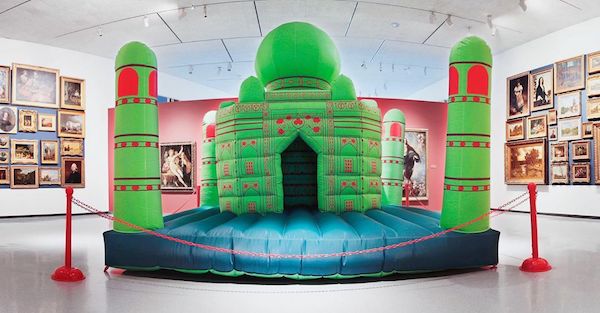 Divya Mehra, Afterlife of Colonialism, a reimagining of Power: It’s possible that the Sun has set on your Empire OR Why your voice does not matter: Portrait of an Imbalanced, and yet contemporary diasporic India vis-à-vis Colonial Red, Curry Sauce Yellow, and Paradise Green, 2018, inflatable attempt at the Taj Mahal, acrylic deep base paint (photo: @DivyaMehra)

Bookended at the tail of the exhibition is another assertive, albeit seemingly playful, gesture by Mehra. It’s a rendition of the Taj Mahal recreated as the kind of inflatable castle you find at any suburban kid’s birthday party – except Mehra has barred it off so we can’t jump on it. It’s a representation of a monument we’ve seen so often that what it stands for has bottomed out into an ominous plaything we can’t even touch.

The cumulative impression of Vision Exchange is a rich visual lexicon of artists adding to a portrait of the country that insistently propels us forward despite its history of colonial disruptions and subsequent internal divisions. At the same time, the artists unwind any nationalist interpretations while exuding a kind of subversion to the stale tradition of Western curatorial practice. For most people visiting the WAG, it will be their first exposure to the myriad of practices in this exhibition and, for that alone, a gathering like this is worthwhile. Unlike narratives often told from a Eurocentric viewpoint, here we see a cross-section of stories told through the eyes of artists engrained in a collective history. In the end, it’s not just a story about India.