Vija Celmins at the Art Gallery of Ontario, Toronto

Latvian-born, US-based artist Vija Celmins’ first North American retrospective in over twenty-five years is a champion effort at presenting five decades of her work as well as some newer drawings and paintings. Occupying the fifth floor of the Art Gallery of Ontario, To Fix the Image in Memory features over 110 works concerned with her meticulous desire to capture a moment – one that often evades sustained looking: the billowing of smoke, the depth of a night sky, the wispy threads of a  spider’s web – and to reinscribe that moment, that memory, onto a surface with an exactness afforded only by intense focus. In experiencing Celmins’ work, there is a feeling of being released, of a subtle loosening, and of being part of something vast, intense, and worthy of remembering.

Presented in predominantly chronological order, the exhibition begins in the mid-1960s with subjects fixed in Celmin’s mind while growing up in Europe during the Second World War, and later recalled long after her family had relocated to the United States. War planes (more specifically the propellers made static by painting them), guns, smoke, and fire captivate her eye and reveal her talent for looking and “redescribing,” which she defines within her process as the act of translating one surface onto another with close attention and inexhaustible focus. 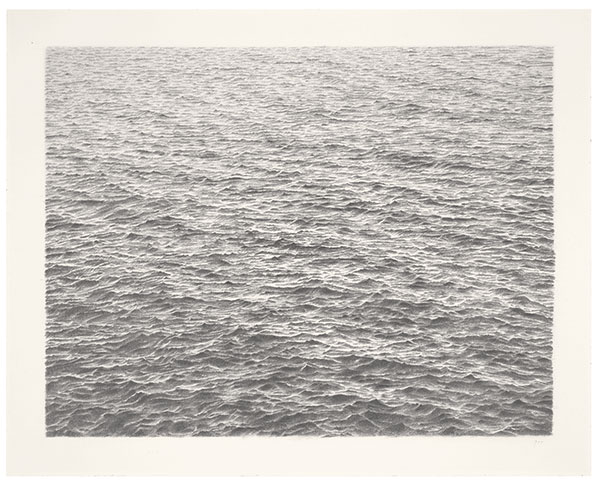 Next came Celmins’ Ocean series from the 1970s for which she became well known. Meticulously built-up graphite pencil drawings of photographs of the ocean are grounded beneath by a lightly etched grid. As the body and the eye proceed and recede from these works, a sense of the painstaking attention given to the making of this remarkable visual experience is evident. It is here that a feeling begins to arise of being let loose, floating along the picture plane with the peaking waves. The viewer’s body feels removed, unhinged, as one shifts in and out of fields of depth from macro to micro.

The exhibition moves through the 1980s and 1990s with Celmins translating night skies and desert floors, spider webs, the moon and galaxies. In these images of the natural world, between the cosmos and the creations of small creatures, bound by the frame that the artist provides, one feels both minuscule and inconsequential – and yet, and then – omniscient and in control depending on where one stands. At times, her work also offers direct evidence that it has been derived from photographs as when she faithfully documents what she sees on the photograph’s picture plane, such as  doubled images and imperfections made by the camera lens.

Ironically, photographic reproductions rarely do these works justice. Most of them demand the ability to pivot and the intense focus that a physical viewing affords. In this way Celmins is successful in turning the viewer into an apparatus for looking, a camera of sorts, where one’s memory becomes the photograph one takes away from the experience of viewing. 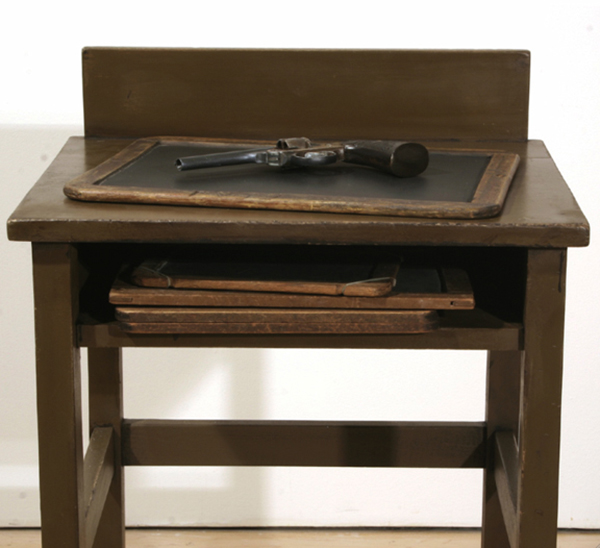 After four decades and towards the end of the exhibition, we see Celmins loosening in her visual vocabulary through the reintroduction of manufactured objects tinted with nostalgia, exploring new forms for still lifes from found objects in her studio, playing with inverted images, and applying a wider colour palette. There is a tightly cropped and faded blue Japanese book, the interior of a seashell, and reversed night skies framed by shaded boundaries. In the Tableau series and Table with Gun, Celmins engages sculptor Edward Finnegan in reproducing several 19th and 20th Century chalk boards used by children, and in fabricating a replica of a desk and a gun (which she had painted in her early work of the sixties). Finnegan casts the sculptures in bronze and Celmins paints and finishes them. Much like her Two Stones – one bronze and painted stone, and one found stone – these works are crafted with such precision that one cannot distinguish the originals from the copies with certainty.

The  precision and impeccable redescription of the marks on the stones speak to a kind of focus not often given to these bland items found almost anywhere. To see Celmins offering her full attention and elevating these objects beneath our feet, of which none are inherently special, acts as a reminder that there is value in even the most ordinary of things. For her, the Stones sculptures were a test of sorts, “to see what her eyes could see… a test of the imagination, to reimagine [one surface] onto another.”

Walking through this exhibition is also a test for the viewer. In a time when we look at hundreds of random and disjointed images a day, this is a welcomed opportunity to allow oneself to be captivated with maybe a grain of focus compared to what Celmins puts into making these works. And it is both rewarding and uncomfortable in some moments to hold space with these records of years spent making, just as it is overwhelming to meditate on their subject matter and our place in relation to it, and to be loosened.

The exhibition concludes with Celmins revisiting one of her Ocean paintings thirty years later through the creation of six paintings side-by-side and anchored by an inverted night sky in white on the left and a deep black night sky to the right. In this arrangement, the works provide the viewer more than enough space to pause and place themselves comfortably into this unhinging.

Vija Celmins: To Fix the Image in Memory continues until August 5.
Art Gallery of Ontario: https://ago.ca/exhibitions/vija-celmins-fix-image-memory
This gallery is accessible.

Chiedza Pasipanodya is a Zimbabwean artist, curator and writer living in Toronto. Her interdisciplinary practice is concerned with themes of liberation, acts of unearthing, and what exists in the in-between spaces. Instagram: @ccchiedza