Veils of a Bog at Western Front, Vancouver

After passing through a darkened vestibule, we emerge into copper light and are greeted by three spinning mobiles, Vanessa Brown’s cohort of sculptures collectively titled Veils of a Bog, submerged in the sonic bath of Michelle Helene Mackenzie’s multi-channel sound composition Post Meridiem. Three tiers of horizontal steel rods with notches at the tips spin like outstretched arms with their palms up. Organic matter such as dried flowers, branches, and bulrushes orbit with human designs like photographs and drawings. Seeing the mechanized rotation of Brown’s mobile sculptures as slow-motion pirouettes imply that they have bodies, but also that they possess personalities and excitements transmitted through the movement of the selected materials and surface treatments. Composing the sculpture’s anatomy are sheer textiles that are suspended like an excerpt of fog. Large photographs of Byzantine sculptures, mostly women and sections of their clothes, hang from the summit of the sculpture giving its steel skeleton a kind of skin that bears the representation of a body. 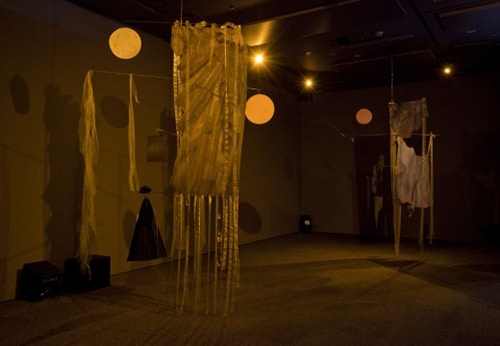 Mackenzie’s sound composition seems to fulfill the representation of a substance that preserves the movement and atmosphere in the exhibition room. The positioning of two audio elements locates us, the audience/visitor/interloper, in their bog. Firstly, field recordings of animals and insects are positioned high above the sculptures and play across four speakers. Second, a low frequency drone emits from four speakers and a subwoofer that are positioned against the walls and floor of the gallery. This arrangement steeps the infrastructure with the setting, further encasing our experience in the worlding of Brown and Mackenzie’s works. Mingling recognizable organic sounds with a less figurative or descriptive sound presents a sonic analogue to the sculpture’s materialism. Post Meridiem was produced as a site-specific accompaniment to Brown’s body of work, a score for the sculptures, but the notion of a “site-specific” is treated with a compelling flexibility. The “site” has been dislodged from geographic specificity and is comprised of a world that is reconstituted when these works come together to facilitate it.

Veils of a Bog continues until October 20.
Western Front: https://front.bc.ca/
The gallery is accessible.