L’Imagier in Gatineau was once the cutest little artist-run centre in Canada. Founded in 1975, the centre was in a funky chalet built out of wood from an old barn and surrounded by a whimsical sculpture park close to the Alymer marina and within view of the river. In a major reconstruction project costing $2.6 million, the building was demolished and transformed into an impressive contemporary facility. Exposed wooden beams and salvaged materials from the old edifice lend warmth to the cool new modern glass and aluminum box. For sentimentalists, the whimsical park remains. The first exhibition in the new space, Trames narratives / Storylines, opened in May and continues until the end of July. 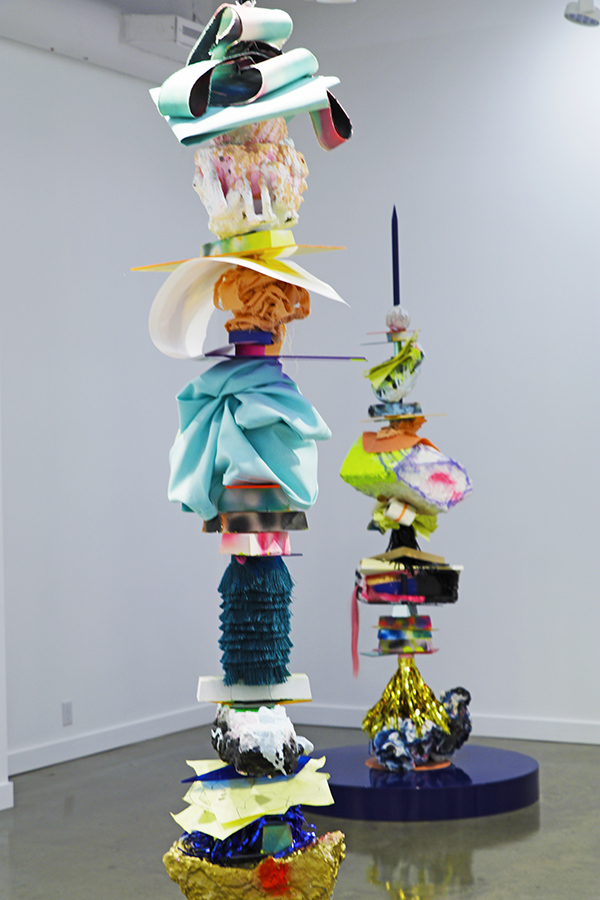 With a title that suggests an anthology of contemporary art from Canada and Quebec, the exhibition gathers together an impressive cohort of curators and artists. Six Quebec-based curators (Kasia Basta, Marianne Breton, Paul Brunet, Marie-Hélène Leblanc, Stefan St-Laurent, and Julie Tremble), many from the National Capital Region, contributed to the development of the exhibition. They each selected one or two of the seven artists in the show (including Chun Hua Catherine Dong, David Elliott, Kablusiak, Kim Kielhofner, Carl Trahan, Jennifer Lefort, and Mélanie Myers). The number of people involved and the number of artworks that are clustered in the modest-sized gallery evoke a housewarming party.

It is a convivial environment. Marianne Breton, the general director of L’Imagier, conceived of the exhibition as a means to promote exchange and dialogue. Like any party in full swing, there are lots of conversations going on at once. The soundtrack from Kim Kielhofner’s video about her time at the Est-Nord-Est Artist Residency in Saint-Jean-Port-Joli is the only work that is audible in the exhibition, but the many brightly coloured works in the show are just as loud. Jennifer Lefort’s Salutations sincères [Warm Regards], created especially for the show, resemble giant memo spindles or receipt spikes with impaled sketches, scraps, canvasses, and bits of multi-coloured plaster and polystyrene, comprising a monument to vanquished time in the art trenches. These and other excellent works, such as Mélanie Myer’s trenchant wall and floor pieces and Kablusiak’s playfully unsettling photographs, are sure to spike further discussions.

Michael Davidge is an artist, writer, and independent curator who lives in Ottawa. His writing on art and culture has appeared in Border Crossings, BlackFlash, and C Magazine, among other publications. He is Akimblog’s Ottawa correspondent and can be followed on Twitter @MichaelDavidge.