The world according to GARP at Franz Kaka, Toronto

Wade Avenue is a strange place, to say the least. It’s a neighborhood I often frequented to buy coffee beans by the pound and for studio visits with artists at Akin Collective. It’s also where I worked briefly one summer sleeving vinyl records into jackets, next door to an auto body shop and an industrial design studio. On my breaks I would head across the street, braving the stench of the adjacent gelatin factory, to visit 87 Wade’s galleries: Darren Gallery on the third floor and Franz Kaka/Towards Gallery in the basement (read this for an explanation of the gallery’s doubled name). How did this bizarre combination of ordinary establishments end up on such an unusual street? Perhaps we will never know the answer, but Franz Kaka’s current exhibition perfectly illustrates Wade Avenue’s allure in its simultaneous familiarity and out-of-place-ness. 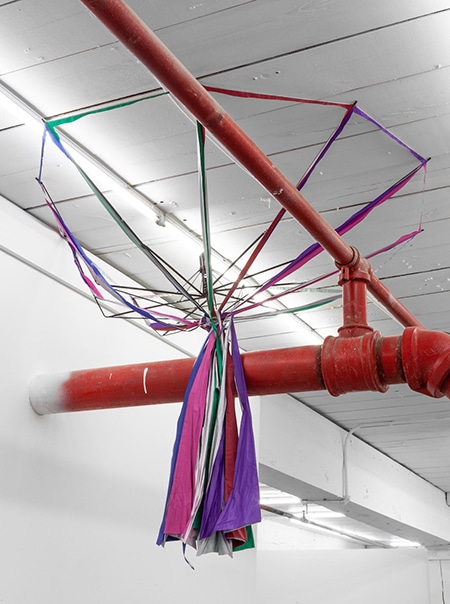 The world according to Generalized Axiom of Revealed Preference takes its name from an economic equation derived from analyzing choice behaviour. The equation is quite complicated (if you’re curious or a math nerd: < L + → < if u(x t ) ≥ u(x) for all x ∈ B(p t , p t · x t ) and t = 1, …, T), but the notion is straightforward: if two things are the same price and the consumer chooses one over the other, the producer assumes you have done so in accordance with a personal preference. The curatorial statement builds on this to ask: how do you quantify a preference in the first place, and what about choice behaviours that occur outside of the purely economic sphere? While the premise is intriguing, the show appears to work just as well (if not better) without the unduly specific curatorial concept. (Or is my choice behaviour showing?) 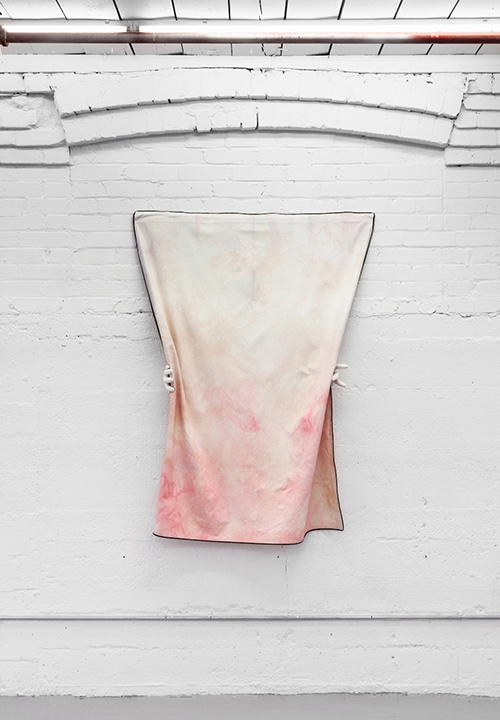 On entering the gallery, I notice an umbrella standing in the corner, threadbare and tattered. “Does that belong to someone?” I wonder. Looking up, there is another umbrella, this one turned inside out, its material dangling as it spiders over a fire engine red pipe. Both are the work of South Korean-born artist HaeAhn Kwon, who has found a way to suspend (literally) the familiar frustration and absurdity of carrying an utterly useless umbrella during a rainstorm. A little further into the gallery, interdisciplinary artist Walter Scott shows two sculptural pieces. One is a piece of cloth tinged with red, hanging on a wall with two disembodied, comical white hands reaching from behind, cinching the material at its waist. Directly opposite is a pulley structure (of sorts) supported, somehow, by a tote bag. Two white circles of paint are on the ground, mirroring the cloth-clasping hands before it. Even further in, Jeremy Laing’s giant hangers are partially woven with yarn, and equally oversized ceramic buttons hang from their thread.

The world according to Generalized Axiom of Revealed Preference is a stunning exhibition. Familiar objects like tote bags, hangers, and umbrellas are transformed by each artist in unassuming ways. Each object, as the curatorial statement suggests, possesses “[its] own seductive agency,” yet keeps its viewer at arm’s length, perplexed and inquisitive – much like the building in which they can be found.

The world according to Generalized Axiom of Revealed Preference continues until November 24.
Franz Kaka: http://www.franzkaka.com/
The gallery is not accessible.