The Way She Looks at the Ryerson Image Centre, Toronto

On my way into the Ryerson Image Centre I bumped into a former student. In the flickering light of Syrus Marcus Ware’s multi-channel video Ancestors, Can You Read Us? (Dispatches from the Future), she told me, exasperatedly, that another exhibition’s 19th Century material was upsetting. In spite of the curators’ aim to not “repeat the victimization” of Black women, the older pictures appeared to her, as a Gabonese Malian photographer, to do exactly that. While the show’s title, The Way She Looks: A History of Female Gazes in African Portraiture, suggests we might frame Black female subjectivity between the 19th Century and the present as an artistic work-in-progress, it is too easy to fetishize “gazes” and too difficult to see “African Portraiture” in documents of racialist ideology. Rather, between the two parts of the exhibition the camera is employed as either an anti-artistic tool of colonial domination or as an artistic medium and a tool for complex social commentary. 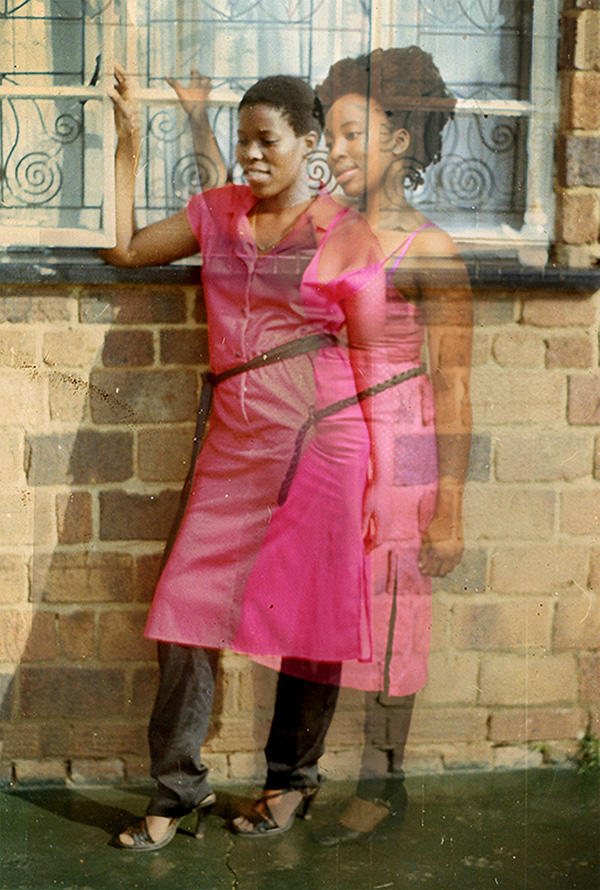 A tension between curatorial and photographic visions runs through the exhibition’s 19th Century gallery. In Samuel Baylis Barnard’s Bushwoman [sic] and Children, South Africa (Portrait of !Kweiten ta //ken), a mother is shown with her sons, one clinging to her sheepskin shawl, while the other older child looks defiantly beyond the frame at the photographer. The mother seconds the older son’s sentiment. The panel for the photo tells us that Barnard respectfully named the woman in the picture’s title, and that she was an “advisor on the !Xam language for well-known philologists.” But notes on the picture’s resemblance to “honorific European” portraits, its “dignifying setting,” and the “tender intimacy of the family” are a stretch. It is a picture of a frightened and resentful family dressed and forcibly posed for the occasion.

Such expressions in the images and accommodations, or evasions in the didactic material are repeated across the gallery. No didactic material accompanies a picture of a child proudly displaying his skin condition (vitiglio) alongside a woman who conveys full, if helpless awareness of the exploitative nature of the photograph. Elsewhere we are given an apology for a photographer whose “primitive encyclopedia of Black South Africans” provided an ideological basis for apartheid in assurances about his “Korana Girl’s” “intense,” “unflinching,” and “scrutinizing” look. The emblem of this plainly colonial photographer-sitter relationship is a wedding photograph by Frederick Lewis – the unhappiest one I’ve seen – in which a thin shadow cast from the bottom edge of the picture takes a sharp turn up the groom’s pantleg, seemingly holding him in place against his will.

After this, the Modern and Contemporary photographs by African artists in the next gallery are a relief. The Modern section is a perfect bridge, with photos by Seydou Keita, Malick Sidibé, and J.D. ‘Okhai Ojeikere that rework tropes of ethnographic photography (e.g., images of grooming practices and identically paired sitters) into pictures of intricate “architectural” hair-dos, cheekily titled “Black heads,” and paired sitters shown arm-in-arm in matching dress as companions rather than types. In this section S.J. Moodley’s pictures of models playfully combining traditional and modern costumes in studio – including a lampshade hat – demonstrate a collaborative photographer-sitter relationship and the camera’s power to capture lighthearted performances of the self or what critic Teju Cole calls “visual soliloquies.” The lampshade wearer is shown seconds after recovering from a fit of laughter. Such performances animate the Contemporary gallery as well, directing the camera’s powers of invention toward memorials for a lost mother (Lebohang Kganye) and assertions of LGBTQ+ solidarity and survival (Sabelo Mlangeni, Zanele Muholi). 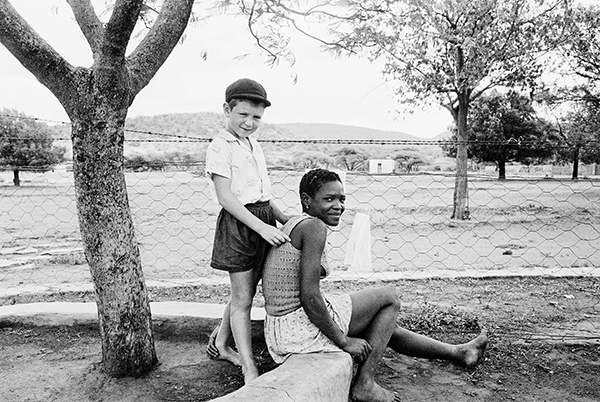 David Goldblatt’s complex views of Black and white South Africans were some of the most compelling in the exhibition for me. Taken between 1949, a year after the official state policy of apartheid was enacted, and 1980, more than a decade before it was dismantled, the images reflect a settler-colonial situation and the complex role of race within it. Whereas a white presence in the 19th Century material is cleared away to capture and objectify Black bodies, Goldblatt shows how the category of race emerges out of historically conditioned differences – in an uncomfortably tender moment between a white “farmer’s son” and his Black nursemaid, a tense moment between Black and white churchgoers gathered to “find ways of reducing racial, cultural and class barriers,” and at a “Miss Lovely Legs” competition where the white finalists on stage draw ire, confusion, and admiration from a mixed Black and white audience.

While Syrus Marcus Ware’s thank you letter to the present from survivors of environmental catastrophe, various “Black death spectacles,” and institutionalized white supremacy seemed mostly optimistic on the way in, the ambivalence of this work struck me on the way out. A grainy black and white recording of Eisenhauer’s 1953 “Atoms for Peace” speech to the UN flits across one of the screens. This historic appeal to support nuclear education and resources for developing countries turns on a duality that describes so many technologies. Across the two parts of The Way She Looks, we see a history of photography that reveals the medium’s destructive and redemptive uses. While the exhibition succeeds in showing how the camera can be liberated, I remain uncertain about the hoped-for story in it of a liberated Black female subject.

The Way She Looks: A History of Female Gazes in African Portraiture continues until December 8.
Ryerson Image Centre: https://ryersonimagecentre.ca/
The gallery is accessible.