The Toronto Biennial of Art

Heading west of out the city, there’s the highway and the Lake Shore. The former is insulated from any sense of time or place. The latter leads me past generations of condos, some still in bloom, past waterfront parks made entirely of landfill, past commercial districts equally divided between empty storefronts and businesses that have yet to be franchised, past a former asylum that now is a college, past motels and empty lots given over to nature, until I reach the evocatively (and once literally) named Small Arms Inspection Building. As I turn off the road a flash of movement catches my eye and three deer run across my path and disappear into the woodland that leads down to the lake. Despite the shifts in industry and the incursions of urban sprawl, the presence of all that preceded the colonizing of this land remains. 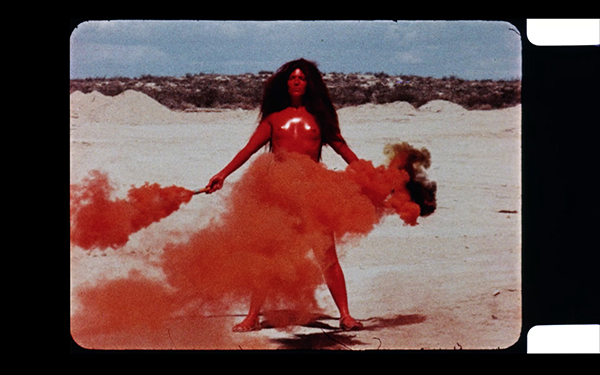 Inside the outermost of the inaugural Toronto Biennial of Art’s fifteen participating exhibition sites (and one of two main sites), part of the history of this place that’s now called Toronto is told from the perspective of the Indigenous inhabitants in a videotape pageant and installation by Jumblies Theatre & Arts with Ange Loft titled Talking Treaties. A more recent, but also distant story of displacement is recounted in the Isuma artist collective’s feature One Day in the Life of Noah Piugattuk. And then there’s Nonuya elder Abel Rodríguez’s illustrations of his ancestral knowledge of ecosystems in the Colombian Amazon and his son Wilson’s perpetuation of that knowledge as a means of preserving both a land and an identity that is threatened with erasure. Change upon change is evoked in a sculpture by Caroline Monnet that takes the sound waves produced by Anishnaabe Elder Rose Wawatie-Beaudoin when she pronounces the Anishinaabemowin word for “the river that passes between the rocks” and renders it in undulating ductal concrete. The vertical form resembles the water it refers to and reminds me of the pre-Socratic philosopher Heraclitus’ ancient evocation of the permanence of flux: you can’t step into the same river twice.

This sentiment resonates far into our geological past in Kapwani Kiwanga’s fabric and stone tribute to the movement of techtonic plates, the New Mineral Collective’s minimalist columns of mining prospectors’ bore holes, and Harja Waheed’s folded map of an offshore oil field. It’s enough to throw me off balance and the inclusion of documentation of performance works by Judy Chicago and Althea Thauberger & Kite only knock me further of my feet. The former’s contribution to the male-dominated field of Land Art is the film and photographic record of temporary transformations of the landscape with coloured smoke. The latter’s video of a composition played by Her Majesty’s Canadian Ship York band’s conch shell sextet drifts like the gentle waves that grind stones into sand over lengths of time that dwarf any one of our lifespans.

Back downtown at the less poetically named but centrally located 259 Lake Shore Boulevard East site, I’m surrounded by partially occupied condo towers that are still under construction. Immediately to the north is a stretch of raised highway that has been under repair for years and occasionally drops chunks of concrete on the vehicles below. To the south is the meeting of land and lake that gives this biennial its name and central metaphor: The Shoreline Dilemma. Inside the former Volvo dealership that houses the second of the main exhibition sites, Luis Jacob’s chronological spectrum of books on Toronto (historical, political, bureaucratic, artistic) is another river that emerges from the undocumented past and points to our murky future. Maria Thereza Alves exhumes one of the city’s buried rivers, while Lisa Steele and Kim Tomczak contribute a video triptych meditating on mortality, and Lisa Reihana’s two-channel video is concerned with Māori and Pacific Islander mourning rituals. Embracing death as an inevitable part of change is a necessary step to growth as well as an acknowledgement of what has been lost.

Amongst the thematic layers and formal linkages that can be found within this powerful collection of works, a playful optimism is also evident in Dana Claxton’s portraits of Indigenous women, Hera Büyüktaşçıyan’s resilient Reveries of an Underground Forest, and Bárbara Wager and Benjamin de Burca’s video collaboration with local poet and musician collective R.I.S.E. As evidence of the possibility of future change and a reason to remain hopeful for the next generation, the Kinngait (Cape Dorset) youth who comprise the Embassy of Imagination along with local art duo PA System display prints, posters, giant puppets, videos, and sculptures (plus they presented a procession that took place on the Biennial’s opening weekend). It’s a delightful and needed reminder that things can change and will, and artists will be there, along for the ride. My heart is rushing as I head back outside and join the crawling traffic that slowly circulates through the city. Even at this reduced speed, at least I know we’re moving.

The Toronto Biennial of Art continues until December 1 at various locations.
The main Biennial sites are both accessible.