On June 27, a large audience gathered for a performance titled I Still Know inside the exhibition Surrounded: Skeena Reece at the Morris and Helen Belkin Art Gallery. Reece and her mother entered the room and took their seats. The artist soon stood up and began walking around the circle and greeting the viewers. She looked into our eyes and offered her hand. She removed the hats of two young men, prompting a third man to remove his on his own. After introducing her mother Cleo Reece to the audience, the artist began the process of wrapping her in an adult-sized moss bag, a traditional pouch for carrying babies. 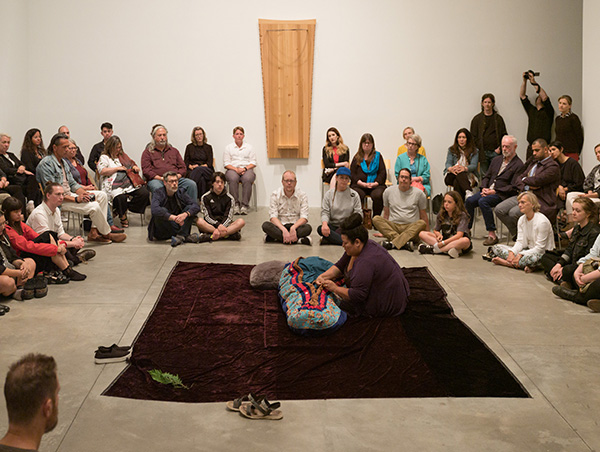 “It’s a full circle,” she later explained to me, referring to the performance. Reece holds her mother in her arms, similar to how her mother once cradled her. This particular moss bag and the adult-sized cradle board hung on the wall are part of her work The Time It Takes. The piece has been used in previous performances and exhibitions. However, her mother will be the last person coddled in this particular sack.

On two of the walls is The Medicine Bag: Your Body, which includes twelve photographs of specific individuals who have influenced the artist and the Vancouver arts and cultural community as a whole. Of special note is Redwire magazine, which played a formative role in her “cultural mapping” and community building as a youth. Video documentation of the wrapping process is also on view. By engaging in this way with individuals of the community, Reece tries to hold on to what she feels is being lost: connection.

Other works in the exhibition include the video Touch Me, which shows Reece washing the respected senior artist and influential teacher Sandra Semchuk in a tub, and Hold This, which focuses on a dirt mound outside a sweat lodge that’s used to place jewelry to avoid the metals burning the skin during ceremonies. Wallpapered at the end of the hallway is a large black-and-white photograph titled I’m Telling You from her series We Still Know that depicts young Indigenous men dressed in vintage clothing and resembles historic family photographs. The men in these images simulate the generation who had just left residential school, at an age when they would not necessarily understand the full impact of their childhoods on their lives.

These works and others think through Indigenous identities and cultures. Hidden in their gentle gestures of care and nurturing is a reminder of their opposite: the violent history and on-going reality of colonialism that has traveled through generations into the lives of Indigenous peoples today.