Simon Fuh’s solo exhibition at aceartinc.’s Flux Gallery is titled The Greatest of All Time. It is a phrase that over the last few years has been casually tossed around in relation to everything from athletes to random objects to passing events. Part of its attractiveness is how its hyperbolic nature gives way to ironic effect. But it also signals a special brand of domination intrinsic to a capitalistic and patriarchal mentality. It’s a “winner takes all” incentive to be the best. To be the ultimate one. The Champ.

On the other hand, it also captures the kind of abject and fragile male chauvinism that tends towards desperate overcompensation. Successive victories are at one with the theatrics of sports. To be victorious is to perform and flex for stadium love as much as it is for the posterity of endless camera replays.

Case in point: the berserk antics of tennis Hall-of-Famer John McEnroe – now considered one of history’s greats in any sport, not just tennis. This is not only because of his deft skills or volleying artistry, or even because he at one point held seventy-eight titles and was continually undefeated throughout the seventies and eighties before retiring at the age of twenty-six. McEnroe’s status as the greatest is in part due to his over-the-topness, the hyper-drama and combustible persona he brought on the court. He repelled audiences and repeatedly won them over. 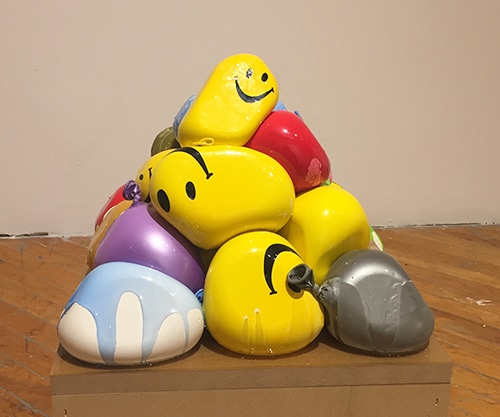 Being a competitor with the seductive appeal of achieving GOAT status is an aspiration for unending perfectionism. A feat that is inherently absurd but alluring nevertheless. Do we ever wonder what happens to star athletes after their career dwindles?

Fuh’s installation is a wonky postgame sprawl where the party is over and any expression of triumph is a sagging smiley balloon. All the charge of a win, all the confetti, the champagne, and the inflatables are now reduced to a sticky, drugged-out, bent out of shape scene. Fuh’s exhibition is the shiny comedown. It feels like a surrealist aftereffect of a hangover. His balloons sit on the floor and mold together into obtuse forms that appear hopelessly sluggish. They feel heavy. But they are still smiling, even though there isn’t anything to smile about.

Or perhaps Fuh is in on the farcical seriousness of being the greatest at all costs. One of several odd second acts that retired athletes take on to capitalize on whatever flame they still have is to publish a memoir reciting the glory days. McEnroe has two: You Cannot Be Serious and But Seriously. He looks back in delight at his former controversy-laden days when he was aspiring to be the best. And of course, he can’t help but chuckle at his ridiculous behaviour. Fuh’s exhibition explores that same insipid hunger for power through win after win. However, here he contorts it until it just looks bloated.

Simon Fuh: The Greatest of All Time continues until November 17.
Flux Gallery: https://www.aceart.org/flux-gallery
The gallery is not accessible.