Through a call and response project spanning at least six years, Shary Boyle and Emily Vey Dukehave constructed a narrative of a young girl coming of age in a wild, post-apocalyptic world. Their collaborative exhibition at the Art Gallery of Nova Scotia is comprised of thirty-two poems paired with illustrations to create a storybook that takes the viewer on an in-depth journey within a loosely defined dreamscape. 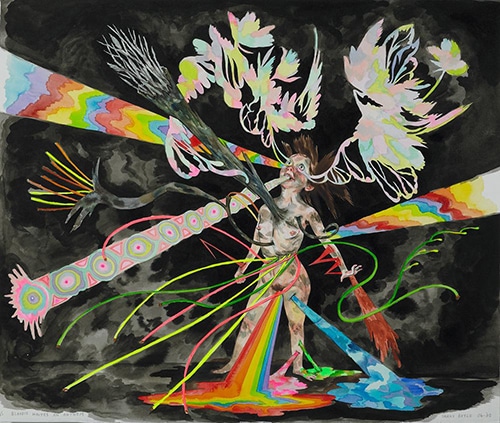 The project began with Vey Duke writing a poem and Boyle painting a colourful and detailed illustration in response. Then Boyle created an illustration and sent it to Vey Duke to write her next text, and so on. This correspondence was carried out by the pair from 2003 to 2009, and the show encourages a consideration of the inspiring process that bound their independent practices. More than anything, it’s a narrative of two artists developing in synch. They play with medium and thought, and have space to see what works and what doesn’t. Much of the imagery unnerves, but the looseness of the creative format allows the viewer to leave with unanswered questions, feeling unsettled but engaged.

Vey Duke’s poems often weave long stories and Boyle’s illustrations invite careful consideration, so even the relatively small gallery space can be demanding to work through, especially given the absence of seating to take a brief reprieve. However, the world they’ve concocted is an imaginatively dark and tantalizing space for the mind to play.

Anna Taylor is an artist, crafter, and organizer sitting on the board of the Halifax Crafters Society. She is Akimblog’s Halifax correspondent and can be followed on Twitter @TaylorMadeGoods.