Borders and migration, land disputes and resource extraction, and race and gender-based discrimination will remain important themes for artists so long as the problems they reflect are unsolved. Like documentary reports, artworks that aim to raise awareness about these issues run the risk of feeling merely informative or remote from our day-to-day experience. Shannon Bool’s The Shape of Obus and Kapwani Kiwanga’s Sunlight by Fireside, a pair of exhibitions at Musée d’art de Joliette, began with research on French Algeria and the British Empire respectively. Both histories provide receding backdrops for debates in Quebec on national/ethnic identity and Indigenous rights. Besides their elegant variations on stock themes in global contemporary art, another thing that saves these exhibitions from the trap of the documentary is their resonance with these debates in the lead-up to the provincial elections. 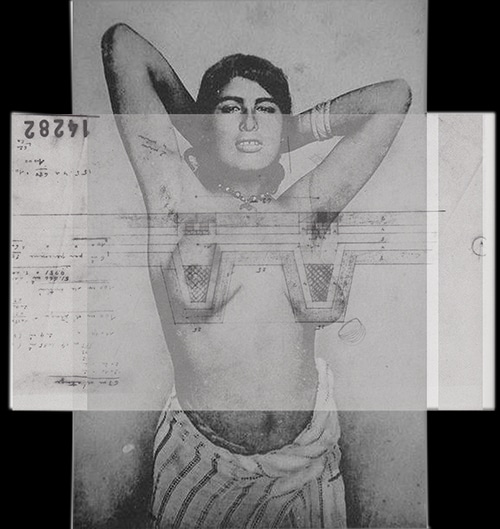 BC-born, Berlin-based artist Shannon Bool took the title for her exhibit from the architect Le Corbusier’s unrealized Plan Obus for colonial Algeria. Drawings for the modernization scheme meant to co-ordinate French and Muslim sectors of the capital city Algiers are mingled on large textile works and smaller photographs with images of real and imagined “Moorish” women from Le Corbusier’s sketchbooks. Among fourteen photographic prints in the series Obus Girls, Bool offers two contrasting visions of Le Corbusier’s integrative plan. Erotic postcard images are mostly harmonized with overlaid architectural drawings to accentuate the curve of a breast or a hip, the arch of a lower back, or a gesture line running from a model’s outstretched hands to her pointed toes. But the most arresting combinations are not so seamless. In one of the images an s-shaped sea-barrier flattens the small of a nude’s back, pressing her into the ground, while another shows a model with eyes cast down at forking in-filled spits that look like broken prosthetic legs. These monstrous hybrids convey what the anti-colonial thinker Frantz Fanon called a “Manichean” scenario in which French Algerians looked down upon the inhabitants of Muslim ghettoes as “the wretched of the earth.”

Bool’s works insert Le Corbusier into a line of artists from Matisse to Picasso (and before them, Delacroix, Gerome, Ingres, and the rest) for whom the appropriation of “Oriental” women as motifs was a rite of passage. If the Obus Girls series shows the roots of this tradition, the mixed-medium work Women in their Apartment updates the Orientalist repertoire by superimposing Kim Kardashian’s glistening bottom onto nude figures rendered in the style of Picasso’s The Women of Algiers. This “cheeky” sleight reminds us that art history’s fantasies reappear in mass culture, but Bool’s works resonate powerfully with more local debates too, such as Quebec’s controversial face-covering ban Bill 62. 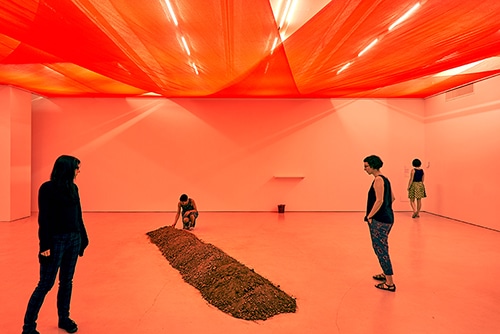 In the next gallery and outside the museum, Hamilton-born, Paris-based artist Kapwani Kiwanga’s works take their point of departure from the history of the British Empire. In the back room a short video titled The Sun Never Sets offers a gloss on a 19th Century epithet for the British Empire. Minute-long still shots of nine former colonies show lightly blowing tree branches and lapping waves illuminated by a setting sun that never fully sets. The work’s ambivalence is clear – in the recorded twilight of the former colonies there are hidden traces of that Imperial promise to range over the planet. Legacies of British colonialism are signaled in a pile of earth removed from a rectangular grave-sized hole in front of the museum, and returned to it in cup-sized deposits by gallery-goers. The work, titled Positive-Negative (morphology), draws attention to ongoing land claims negotiations between the governments of Quebec and Canada and the Atikamekw First Nation whose ancestral lands are located within and beyond the electoral district of Joliette on Nitaskinan territory. In the glow of a ceiling installation called Red Sky at Night, which repurposes a crop shade meant to protect non-native plant species from the sun, the slow repatriation of Kiwanga’s dirt pile to the hole out front takes on a ritual significance. It is a quiet gesture of healing amid louder struggles over the province’s future.

The hole outside the museum competes with campaign posters for the attention of passers-by. Joliette has been a PQ stronghold for some time with considerable support as well for the CAQ party. For these two parties, the Quebec Liberals’ Bill 62 “does not go far enough.” This position, along with calls from the CAQ for “values tests” for newcomers to Quebec, suggests that Le Corbusier’s architectural challenge of integrating Muslim and French populations persists as a legal and social one in Quebec. Curator Anne Marie St Jean Aubre noted the importance of Bool and Kiwanga’s works as prompts for “conversations about the effects of colonialism here in Canada and Quebec, and closer to home for them in the Eurozone.” Negotiating national identity in Quebec and elsewhere is a thorny business that the museum alone can’t resolve. But the “scar-like trace” left on its grounds by Kiwanga’s work will serve as a local reminder that such negotiations stand to be enriched, not threatened, by the inclusion of as many voices as possible – especially those of Indigenous people and newcomers to Quebec.