Embodiment of self, identity politics, the act of looking and being looked at, and the wrapped/rapt body. These themes intertwine throughout the exhibition Second Skin at Glenbow. Curated by Sarah Todd to compliment the museum’s current Nick Cave mini-survey, it brings together five contemporary Canadian artists who confront and destabilize issues concerning the body and self through their practice.

Calgary artist Tia Halliday’s work merges performance and painting. The resulting performed paintings are both document and realized artwork. Enrobing bodies in fabric, limbs, hands, even jaws and eye sockets are seen pressed against the fabric around them. Through her maneuvering within the confines of this boundary, Halliday comments on the body politics women face in contemporary society.

Winnie Truong’s large-scale, evocative drawings speak to the body politic from a different perspective. In her series, the overtly feminized figures are imprisoned by lengthy, heavy tresses that tumble in luxurious tendrils around them. A woman’s hair is seen as one of the ultimate signs of femininity, yet body hair is unwanted and undesirable. Here the figures are overtaken by their hair. Truong’s women are overpowered by the very thing that has come to define beauty.

In the photographic series Insiders by Brendan Fernandes, the artist inverts the role of the viewer by photographing the inside of a collection of museum masks. The masks take on an otherworldly presence, with strange empty expressions gazing out from their cavernous countenances. As the masks look out and away, we are implicated in our illicit stare while also being invited for a more intimate glance.

Ghostly visages in two rows of five gawk, hollowed eyes emitting unsettling empty gazes across the room. The photographs comprising I as artifact by Barbara Astman are in fact scans of cosmetic peel-off facial masks. Presenting a literal mask that disguises the complexities of the beauty myth while at the same time perpetuating it, the series creates a tense dichotomy in which to debate the beauty industry within an intimate portrait of one woman’s ritual practice. 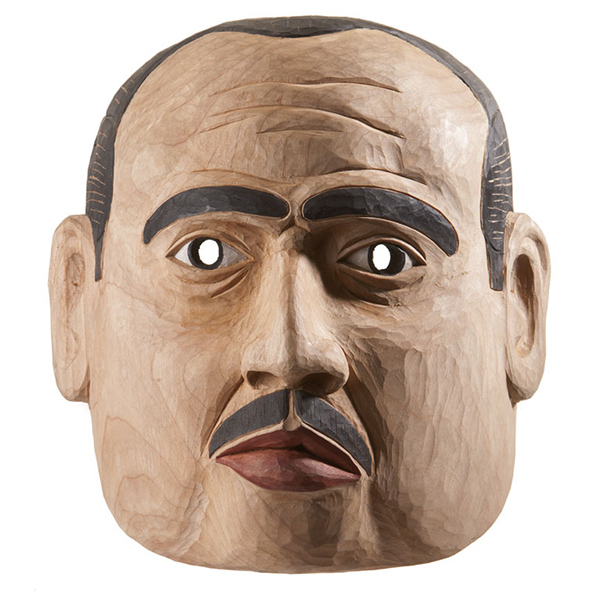 Skeena Reece often adapts the sacred clown or trickster figure within her work. Here the trickster awakens anew in the persona of Marlon Brando. The carved mask of Marlon Brando as The Godfather speaks to traditional Indigenous work while also offering the opportunity to embody the character of Brando and provide a testament to his support of Indigenous peoples.

The work in Second Skin presents bodies emerging. They demand presence in different formations, adorned or not, seen from behind or between, moving, disguised, captured, free.