I’ve never seen the Kenderdine Art Gallery so full. Hundreds of pieces, from framed drawings to painted hides to “image-poems,” comprise Mixing Stars and Sand: The Art & Legacy of Sarain Stump. It’s a lot to take in, and I think that’s the point. Sarain Stump‘s influence wasn’t just that of an artist but a teacher and an activist. Along with co-curator Gerald McMaster, he spent a year traveling to reserves teaching Indigenous Art to children at a time when no one else was. He was a social practice artist decades before this was acknowledged as an art form, and a number of his students have gone on to become notable artists themselves, including Edward Poitras and Raymond McCallum – both of whom have works included in this exhibition. 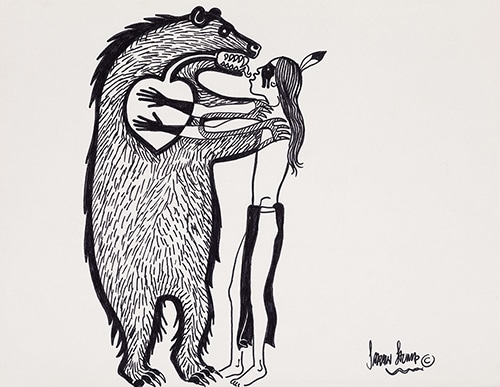 In his art Stump also shares Indigenous stories, often difficult ones. In one of his image-poems (combinations of drawings and short form text) Stump writes “Sometimes I’d like to fall asleep to close my ayes (sic) on everything / but I can’t / I can’t” across three images: the first an Indigenous person lying face down, holding their head in their hands; the second an Indigenous person dancing while a man in a cowboy hat watches; the third a man leaning against a wall, a bottle of what appears to be alcohol having fallen at his feet. One of Stump’s untitled drawings shows an Indigenous man playing guitar while in the background a body, hands and feet bound, hangs from a utility pole.

Stump’s work is firmly rooted in Indigenous culture, yet his own Indigenous heritage is less understood. He was born in Italy in 1945 and moved to Canada before he was twenty (he passed away in 1974). Importantly, he is accepted by the Cree community, and numerous Indigenous artists refer to him as a mentor. From his art and the artists who choose to be shown alongside him, it is clear he worked to share Indigenous stories, and to encourage Indigenous artists to do the same.

Michael Peterson runs Saskatoon’s Void Gallery and the city’s annual Nuit Blanche festival as well as managing programs for AKA Artist-run and the Saskatchewan Craft Council. When he has time he is also a printmaker, currently serving as Artist in Residence at his old high school Aden Bowman Collegiate. If you would like to see pictures of his friends’ dogs, you can follow him on Instagram @michaelprints.