Sarah Sense’s colour photographs in her exhibition Cowgirls and Indians at Urban Shaman pulsate and shapeshift as your eyes move across them and you try to piece together what it is you’re looking at. The Sacramento-born artist doesn’t want to make it easy for you to just take in the image. Her works are more like relief sculptures. A passive viewer will certainly miss out on her intricately layered compositions. You are required to do a double take, step back a bit, move in closer, and come back to it to discover what you didn’t see before. This isn’t photography as a mere smooth surface. You see the perceptibly montaged images but also the textured fretwork that compose the photographs.

Sense has been making photo-weavings ever since she received blessings from the elders of the Chitimacha Tribe of Louisiana (she has ancestral and cultural linkages to the tribe). These works are patterned with generations-old designs the Chitimacha peoples use in basket weaving. Similar to her previous works, this exhibition extends the narrative of the cultural artifacts of an Indigenous nation and moves it toward a different future. By using landscape photography from the Chitimacha Reservation, which on their own could be any empty landscape scenery from the American South, her outdoor shots become live-in; you see Sense’s time and delicate investment to both preserve and revive her own heritage. Some of the panels in the exhibition feel at times introspective, but they are also minor attempts to situate these histories into a wider context beyond herself or her family’s roots. 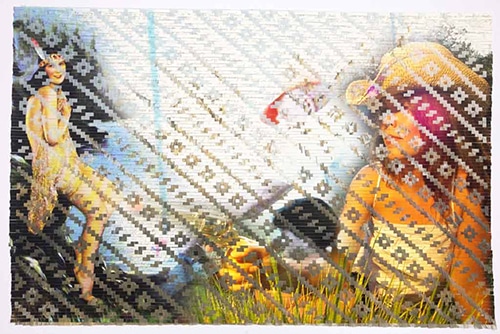 This brings us to the title of the show, which attempts to interrogate a specific past constantly painted by Hollywood’s wild west movies. Included are a group of works featuring performance shots of Sense in what she has referred to as her “Cowgirl and Indian Princess” personas. Collaged with these identities are scenes from several cowboy/Indian gun battle productions that fabricate histories of settlers in the frontier of a “lawless land.” It might be relevant to highlight this especially with the current American political climate (as Sense explains in the gallery didactic); however, any commentary therein seems pixilated, if not a bit forced, among the colourful and ornate photo-weavings.

The whole idea of critiquing the toolbox by using its own tools against itself never really amounts to much. It simply mimics the evil it is trying to point out. I’m not sure what performing as those stereotypes we’ve been inundated with does but flush out more images that can just as easily fall out of context and repeat the same cycle. Staring at those pieces, I can’t help but have a bit of a sour taste in my mouth. I’m left wondering how necessary it is to personify that which you critique, even if it is tongue-in-cheek.