Inscribed in English rather than Chipewyan, these words render colonization as an intrinsic fact, inevitable as breathing. (Res)idual’s five Indigenous artists, assembled by curator Chelsea Brant, subvert this atmosphere with intricate craft and cunning resistance. 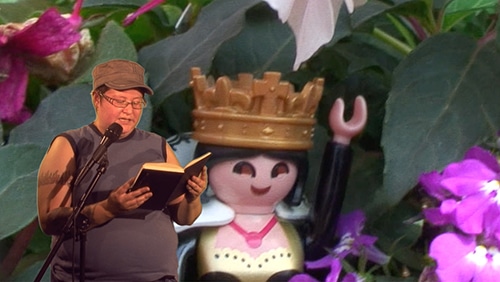 Can I Squish Your Face?, Audie Murray’s grayscale grid of iPhone photographs, gives endless assent to its own question as the unseen artist’s hand squeezes each subject’s face in a gesture that is simultaneously affectionate and invasive in its proprietary scrutiny. Reactions are similarly conflicted between those who gleefully indulge with bulging eyes and others who refuse the camera’s gaze, eyes averted in world-weary acceptance. (See more on Murray’s work on Akimbo Connects.)

Tania Willard’s The Combo offers up fast food trays whose familiar containers and 3D glasses are crafted with fragility and care from birch bark and cedar root yet hollowed of anything of even unhealthy sustenance. KC Adams’ seductive array of snow-white leather accessories for personal electronics, exquisitely trimmed in crystalline beads and white fur, are held in a plexiglass case that taunts the viewer’s frustrated desire to possess these familiar fetishes, subconsciously triggering the settler’s covetous drive.

Attraction and rejection endure in Thirza Jean Cuthand’s video Just Dandy, in which the artist confides their crush on an Evil Queen enlarged as a Playmobil toy symbolizing the plaything in the artist’s delightfully graphic descriptions of their erotic tryst. The Queen’s parting gift of a dandelion overwhelms the land following her departure, which the artist laments as “Turtle Island’s equivalent of contracting an STD.” Cuthand’s attempt to return the favour by bringing a native plant to Europe is slapped down by customs officials and a hefty fine. Reciprocity fails in this curtailed courtship but it’s the Queen’s loss, given the diamond-sharp gems that come of embracing new ways of life with such fierce resilience.

Stephanie Vegh is an artist and writer who has exhibited her work in the UK and Canada, and publishes art writing and criticism both locally and nationally. She maintains an active profile in regional arts advocacy, and currently serves as Manager, Media and Communications at the Kitchener-Waterloo Art Gallery. She can be followed on Instagram @stephanievegh.