Breaker of Horses is a video essay directed by Pernille Lystlund Matzen and Nanna Rebekka that has genuinely taught me something. The work, currently on view at Or Gallery, hinges on two bronze public sculptures by Thomas Vinçotte. What begins as a Belgian art history lesson – a formal and symbolic reading of the two monuments – eventually shifts into a colonial history lesson that reveals one man’s ruthless and flippant pursuit of beauty. 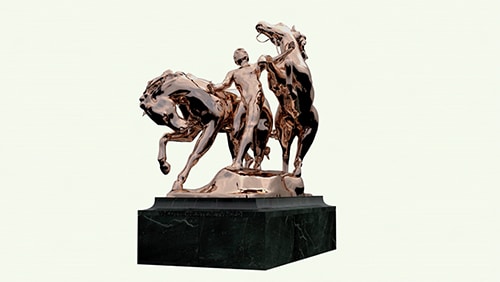 The video opens with close-ups of the patinated surfaces of a bronze Greco-Roman sculpture portraying Hector of Troy (also known as Hector the Horse Breaker) flanked by two horses that he is reigning in. Wider shots with tracking movements emphasize the musculature of the hero and his horses, but behind them we see some demystifying asphalt and power lines. The melodrama of the mythic scene contradicts the banality of its contemporary surroundings: a T-Junction in the Sydhavn district of Copenhagen. Since this reproduction is a copy of an original located in a park in Brussels, it suggests that the mythology is more precious than the object. A subsequent stream of representations of the battle between Achilles and Hector – as animated dramatizations, shadow puppetry, amateur theatre, sports field reenactments, and cinematic adaptation – only reinforces this impression. Clearly worthy of repetition, the story is untouched by time. The video attends to the materialism neglected in the ongoing adulation of this myth.

An ethereal voice sing-narrates throughout and is accompanied by a staggered and spacey rhythm. This odd strategy effectively conveys the video’s lesson, while it also evades slipping into didacticism and even manages to deliver the phrase “the surface of the horse breaker is greenish” in a captivating way. The singer-narrator introduces the sculpture’s location near a cemetery and points out the connection to that site: “Like the cemetery where the dead have left marks in the ground, so history has marked the patinated bronze.” The parallel identifies the surfaces of these monuments with death sublimated into their materialism, but the Eurocentric canon often eclipses death with glory.

Through an unexpected and affective accumulation of electronic-score-as-storyteller, archival footage, split-screen streetscapes, and digital animation that inhabits museum spaces, the film’s more pertinent subject is the second monument of King Leopold II who privately colonized the Congo and violently extracted resources that largely went towards fabricating sculptures and building museums in Belgium – including a Belgian Congo Museum inspired by Versailles. Leopold treated colonization as a decorative pursuit involving minimal political legwork or economic brokering. The first sculpture in Breaker of Horses suggests that myth can overcome material history; however, while the Horse Breaker sits awkwardly on a T-Junction, Leopold II’s equestrian monument stills stands on Throne Square in Brussels.