Trump’s presidency is at least excellent news for jack o’lantern design. Another consolation: his win was immediately followed by a Women’s March to advocate for healthcare reform, reproductive rights, environmental protections, LGBTQ rights, and racial equality. Nearly two years later, Trump has emerged as a common enemy for progressive movements from #MeToo to BLM to BDS, but he hasn’t gone away. Three exhibitions at Concordia University’s FOFA Gallery widen the lens on feminisms to account for their vitality in the face of such stubborn patriarchal powers, their diversity, and the tactics that carry them forward under the radar of the mass media.

In the gallery’s street-facing window, Objects of Resistance by Janina Anderson (assisted by Rebecca Munce) displays front pages of newspapers that were “blacked out” in a performance during the Women’s March. Trump appears in one with a raised fist under the headline “America First.” In another he stands smugly with his wife on one side, and Barack and a mortified Michelle Obama on the other. The chasm between the couples is marked by a curved band of black thread that obscures Trump’s face and lovingly frames Barack Obama’s. The other pages aren’t so delicately treated. Wildly sewn thread crisscrosses Trump’s raised fist and speeds across each line of text in an article about his inaugural speech’s “Nationalist Tone.” The thread has its tone too – angry, desperate, and helpless to reverse the course of history, but hell-bent on redirecting it. 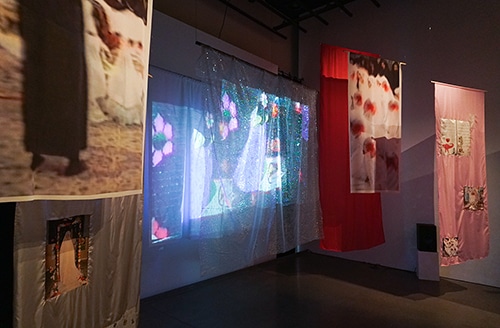 In the main space the collective Taklif: تکلیف offers reading, viewing, and listening stations to foster dialogue about Ideas of Femininity in the Islamic world and beyond. Designed by Shirin Fahimi, Setare Arshloo, and Shima Asa, the exhibition includes a central platform covered with fabric from Iran and books by international feminist authors (Leila Ahmed, Sara Ahmed, Chandra Mohanty, and Trinh T. Minh-ha, to name a few), and surrounded by prints and projections on banners. Its putative subject is the Jashn-e-Taklif ceremony, an Islamic rite for Iranian girls that was instituted in schools after the Revolution of 1979. Our gaze passes through a sequined screen at the front of the gallery before landing on uniformly veiled participants in a grainy home movie of the ceremony. Throughout the space the image of veils is repeated, but interrupted as well. A cartoon of a blonde body builder in a bikini hangs on a banner beside a note written in Fahimi’s old diary: “I hope for you, Shirin, that like the woman in this picture you can be powerful and strong.” Other figures of women intrude in a Taklif member’s recorded childhood memory: “I believed that white skin, blonde hair and blue eyes were minimum qualifications for angels.”

Ideas of femininity in the exhibition are complicated at every turn as they are referred to racial types, political interests, and religious conventions. The group members’ recorded memories are too idiosyncratic, and their feelings about the ceremony too conflicted to support a monolithic reading of femininity, Islamic or otherwise. As Leila Ahmed notes in her work on the “discourse of the veil,” arguments about how women ought to appear have historically distracted attention from more serious political, social, and economic challenges they face under patriarchy. Taklif moves beyond the iconography of Islamic feminism to reckon with the lived experience of its adherents as well as its critics. 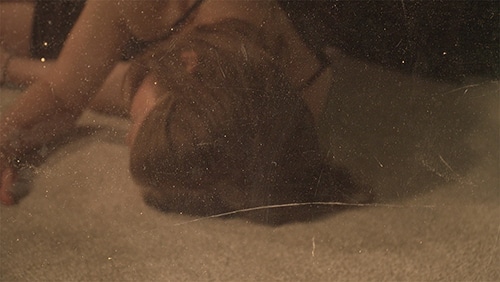 In the black box at the back of the gallery, Anna Hawkins’ video loop Fall Fell Felt shows clipped, stilled, blurred, and re-enacted images from recordings of “girl fails” taken from the internet. Staples of the subgenre are gathered in the work: botched bridge jumps, belly flops in pools, high-heel trips down stairs, trampoline slams, and mishaps with motor vehicles. As we are carried along from one “cinematic moment” of girl failure to the next, Hawkins pauses on the burden of our voyeurism. When the source videos are recorded on the artist’s desktop, we look past the residue of greasy fingers on a screen. When a woman is pushed from a bridge over water, our visual pleasure is withheld as the image is torn in two then recomposed before the splash. We’re denied witness to a bikini-clad woman’s trampoline accident, but catch her lying face-down in a suburban backyard after the fall, and before Hawkins spirits her away with a dissolve. In the video’s transitions the artist replaces parts of her protagonists’ bodies with her own – suspended feet, an extended arm, or folded leg – in effect “breaking both the surface of the image and the falls of her subjects.”

This move models an empathetic response to women in trouble, in contrast with the insensitive jeers and heckling heard in the background of the work. If warty jack o’lanterns with toupees had voices, this is surely what they’d sound like. Hawkins suggests a salutary thread through the exhibitions. A capacity to assume points of view that are not one’s own is a durable feature of feminisms near and far, from #MeToo to Tehran. In this way, the exhibitions make a case for a feminist coalition politics. But risks of disintegration are ever present. The framing of white, brown, Islamic, and cyber-feminisms from one room to the next, and occasionally within a single work, is ambivalently read as a respect for differences and a balkanization of the women’s movement. To the FOFA director’s credit, this tension is left to stand.