Three connected projections curving along a main wall make up the three-channel video and sound installation Suck Teeth Compositions (After Rashaad Newsome) by Michèle Pearson Clarke currently on display at The New Gallery. The impressively large projections feature multiple individuals of Black and Caribbean descent looking out at the viewer and sucking their teeth. It’s a sound that is culturally known in Black communities and, as writer Natalie Hunter-Young describes it, something that is socialized as if by osmosis. The work is a response to the ongoing series by Black American artist Rashaad Newsome entitled Shade Compositions (2005 – present) in which he brings women and gay men together in a symphonic melody of snapping fingers, smacking lips, eye rolling, and cocked heads. 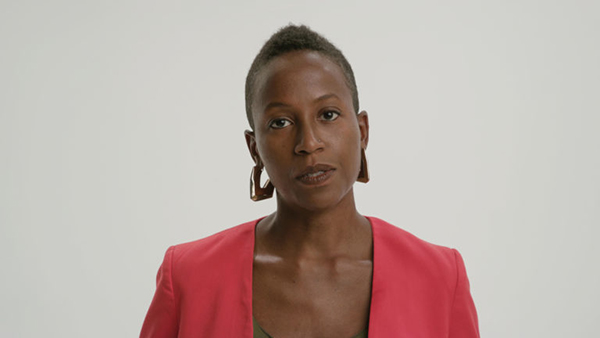 While watching the work, rhythms of movement and sound emerge, harmonizing and shifting across the people from one screen to the next. I feel implicated through my white privileged gaze watching a cultural cue I knew nothing about: the history, the authority, and power that can come with it. Like a language, this nonverbal gesture brings the experience of Blackness together across gender, across communities. As I watch, I am being watched, my gaze thrown back at me, as if being told “What are you looking at?”, “Don’t stop and stare!”, and most importantly, “This is my space too.” With its solo iteration at the New Gallery, Clarke doesn’t just ask, she demands boldly and unapologetically that we look at ourselves looking and remember where we stand and that we live in a racialized world. Here, the Black experience takes stage front and centre, and claims authorship and power over what Black identity means.