The Museum of Contemporary Art is taking a calculated risk by starting the summer season with an exhibition program consisting of basically two works. Sure, Andreas Angelidakis’s DEMOS – A Reconstruction is still there for fun-filled interactivity in the lobby (and before I go any further I’d like to posit that the MOCA’s main floor is the best exhibition space in the building and the half that’s to the right of the front desk needs some serious occupation), but it’s been almost a year. And maybe the Honest Shop plus Adrian Blackwell’s modular furnishings constitute some kind of relational experience, but I never bought (pun intended) the same non-critique of late capitalism that the likes of Liam Gillick peddled plus I’m too staunch a Marxist to celebrate the overt mixing of commodities and artworks as artworks rather than something to feel mildly queasy about while also pretending not to notice (or, at least, pushing the pause button on) the overriding macroeconomic swamp and high finance ecosystem that sustains the art world.

That leaves one with Mark Dion’s not fully dead tree and a VR experience by Lisa Jackson and her collaborators Mathew Borrett, Jam3, and the National Film Board of Canada. The marquee event is the former since Dion is a surviving member of the generation of jet-setting artists who seemed to participate in every second biennial through the turn of the millennium. With his ongoing interest in representations of the natural world, he’s managed to maintain a popular relevance in the era of climate change concern, though in art-speak terms he’s still old-fashioned institutional critique and not au courant Anthropocenic object-oriented ontology. The installation of said tree laid out horizontally, gradually dissected, and inescapably making its presence known as it fills the gallery does, it should be acknowledged, open the door wide to an appreciation of the thingness of the thing, but there are any number of instances of tree-as-art amongst Canadian artists to raise the question of whether lugging the whole set of trunk and branches up a couple floors was worth it (plus you can go to any ravine and recreate the experience yourself).

Dion instead relies on his old tricks and outfits the gallery with a fully functioning entomology lab that blurs the line between actual science and the display culture of science. Anyone entranced by the aestheticized documentary footage of Planet Earth episodes will find the roots of their fetish here. That said, with his wide-eyed and hands-on approach to his material, Dion is never cynical with his work. Even the graphic panels summing up the devastating history of various invasive insect species maintain an objectivity that flits between wonder and awe. 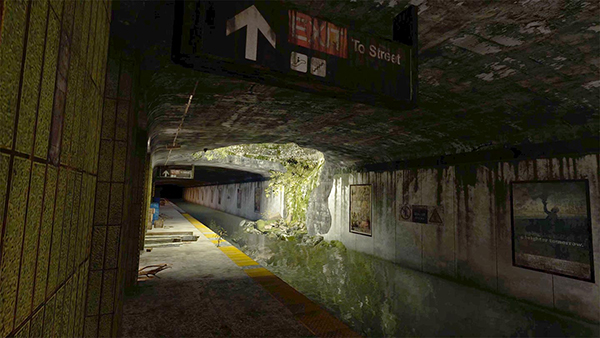 A similar indecision is elicited when one is immersed in Lisa Jackson’s VR installation Biidaaban: First Light. By transporting the viewer from a subway tunnel to street level and then onto the roof of one of Toronto’s skyscrapers, she and her team effectively reorient space and distance in ways that are both wonderful and scary. The landscape that surrounds you when you don the headset will be familiar to citizens of Toronto. The iconic plaza of Nathan Phillips Square helps you locate yourself within the city’s geography. I’d be curious to hear how participants who don’t know our downtown respond to the experience of seeing it overrun with foliage and partially submerged. I supposed it could stand in for any urban centre with modern buildings, but there’s a particular gut-reaction felt when it’s your hometown that has been transformed.

I’m tempted to refer to this world as post-apocalyptic since the towers are in ruins or prelapsarian because there’s a sense of harmony or balance returned, but both descriptions assume a European-Christian historiography that isn’t the story here. Instead, Jackson includes text and voice-overs that invoke Indigenous history, language, and values. From the perspective of First Nations peoples, the collapse of Toronto as we know it followed by a return to a way of life that was all but erased presents a speculative narrative that folds the past into the future. So-called progress is put into question and the heritage of home is given a much longer view. By presenting this within the high-tech context of an all-encompassing computer-generated world, Jackson adds a powerful text to the growing body of art that could be called Indigenous-futurism. Dion’s tree is worth a look-see, but her work is what you won’t forget.