The still growing press around Lisa Jackson’s new multimedia installation Transmissions frequently begins by referencing her last work, the immersive VR experience Biidaaban: First Light developed by Jackson with Mathew Borrett, Jam3 and the National Film Board of Canada. Unsurprisingly, this review does not diverge here because my experience of Biidaaban was profound, moving, and explorative in both literal and figurative ways. To lay my reviewer cards on the table is to say that because of this, my expectations of Transmissions were high, and so it took me some weeks and several visits to untangle this recent work from comparisons to its predecessor.

In Biidaaban, viewers traverse post-apocalyptic Toronto/Tkaranto. Wendat, Kanien’kehá:ka (Mohawk) and Anishinaabe (Ojibwa) languages are layered throughout the journey, both spoken and appearing in written form. In the full seven-minute walkthrough, the visual plane dissolves from an abandoned Osgoode subway station to a decomposing urban rooftop, then an illuminated dome (perhaps a kind of ceremony house), and finally, the cosmos where the immersive experience moves to one of total dissolution. As I hovered in space without a body, I checked under my feet for ground, but found only space – consciousness without form. 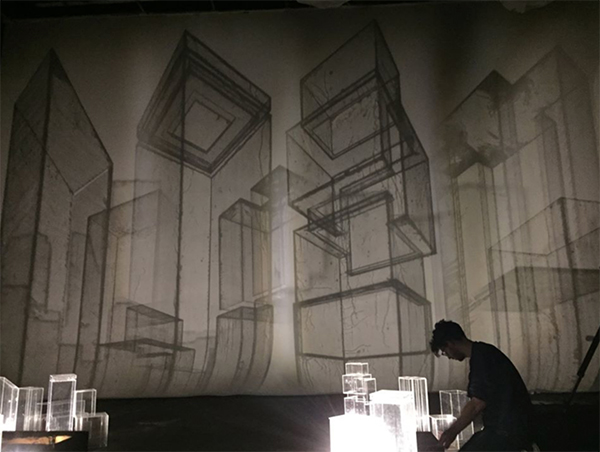 I could not forget Biidaaban when viewing Transmissions because both pieces hold similar ideas of Indigenous futurity in hand with precarious Anthropogenic time, and develop these ideas by propelling the viewer to travel. In Transmissions, the three-part installation at the Fei and Milton Wong Experimental Theatre at the SFU School for the Contemporary Arts, viewers are introduced into the exhibit through a long vaulted moving image projection that shifts between a green and lively forest to bustling West Hastings Street in downtown Vancouver. To set aside the environmental juxtaposition, the arched-projection and the narrow canal produces two effects. The first is one of total immersion where spectator experience is placed within the film, so viewers find themselves among the trees and then on the street. On the other hand, I was positioned in an observational role; the transition of the projection between nature and city pointed toward the fact that I was in neither place. Passing under the projections, I became more aware of my position within the life world of the exhibit rather than my passage through the work’s filmic content.

The second room houses a short film of performer Jeneen Frei Njootli who, dressed in white, digs frantically at the ground with her hands while pelted by a deluge of rain. She digs with both purpose and futility, yet as the rain finishes, she appears bathed in tired satisfaction. Njootli’s character bears a resemblance to the only human figure in Biidaaban, also a young woman in white, clawing at the ground. The docents in the exhibit said this is unintentional, yet it is hard to ignore their shared resemblance, clothing and action. In my first visit, I was puzzled as I tried to parse the connection between the pieces; by my last visit, I was trying to see the ways in which the two were not connected. 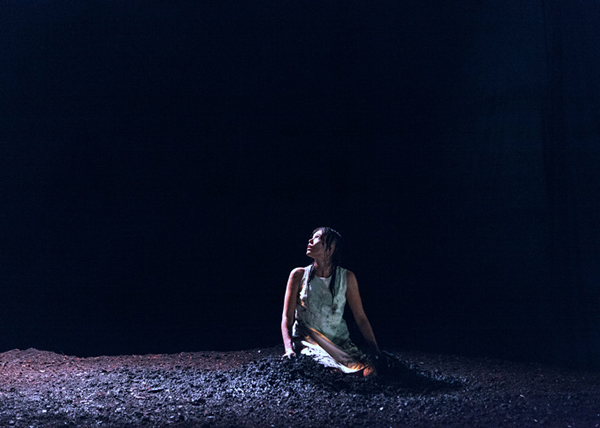 This was all the more difficult since the final room of the exhibit is a pathway to an illuminated dome that looks very much the same as the one in the VR piece. In Biidaaban, once inside the dome, the room dissolves to cosmos. In Transmissions, the dome is situated among cosmic-like trees projected on the walls. In both pieces, many different languages, prayers and stories echo. In Transmissions, these voices mingle with soundscapes by Shawn Cole and Tosca Terran and compositions by Laura Ortman and Raven Chacon. Inside this dome, rather than fading into the universe, viewers are invited to stay, to rest, and to listen to a variety of channels playing the stories of language keepers.

It does not sit fairly to compare these two pieces, if only because I am robbing myself of experiencing Transmissions in its own right. Yet, I am beginning to find the fruit of this exercise. I embraced Biidaaban heartily because the effect of viewing it absorbed me into its form. I asked, what is the value of making elements from the VR piece tactile in Transmissions, when by contrast, this tactility has a distancing effect? The difference of experience within each dome draws this question out: where one dome dissolves the viewer into the universe, the other insists on your earthly attention. The hangout gallery showcasing Jackson’s research on the floor above pushes this distance, putting the studious viewer to work. Transmissions produces a rational experience of art. In the sociological tradition, the turn to rationalism alienates us from a shared animacy between humans and worldly objects. There is a pang of regret when speaking of this push towards greater human mastery, so it is easy to cast doubt on the effects of distance. But (!), as is the experience of the researchers of the world, learning can be an act of love. In Transmissions, Jackson is showing us her work and inviting us to share in it. Rosi Braidotti calls this “methodological nonaggression” and positions the researcher, here the thinking viewer, in intimacy with the world. As my experience of the piece has shown, this is not an easy intimacy, but the work of the piece moves beyond observation to a greater form of participation within the world of objects and language, repurposing rationalism to redeem this distance.

Lisa Jackson: Transmissions was on view from September 6 to 28.
The Electric Company Theatre https://www.electriccompanytheatre.com/show/transmissions/
The Fei and Milton Wong Experimental Theatre is accessible.