Life of a Craphead at Truck Contemporary Art, Calgary

Artist duo Life of a Craphead throw colonialism to the forefront in Entertaining Every Second at Truck Contemporary Art in Calgary. There is no turning back. With humour and a critical eye, Amy Lam and Jon McCurley bring history into the room with all the pain, forgeries (as Jason Hirata writes in his exhibition essay), and lack of acknowledgement that has plagued Turtle Island for centuries. However, in this exhibition the colonial story reaches beyond the borders of Canada to encompass a global view on its impact across time and space. 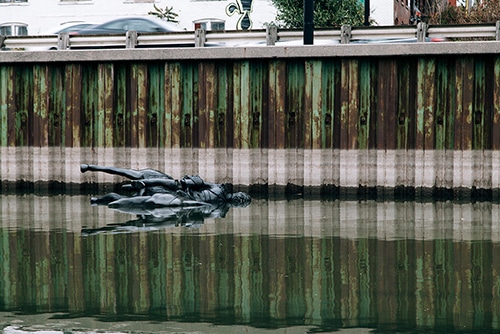 Near the gallery entrance is a video featuring a statue of a regal figure astride a horse floating down a river. King Edward VII Equestrian Statue Floating Down the Don River posits a new history for this figure, essentially “dumping” it out of the public sphere. As a decolonial gesture, the performance in Toronto and subsequent video reassembles a piece of history to suggest a retelling as settler Canadians negotiate through reconciliation.

Chris Cran ‘Self-Portrait with Combat Nymphos of Saigon’ Painting Made into a Tote Bag is an appropriated painting that evades being a painting at all. The piece is derived from a work by the Alberta painter Chris Cran that was subsequently made into promotional material. Lam and McCurley reappropriate the work while simultaneously deconstructing it in a literal and figurative sense. Two large sections are cut out of the image. The act of ripping into the artwork, whether recreated or real, is a reclamation that references Edward Said’s notion of Orientalism and otherness through criticality, humour, and relative ease.

A text and visuals work titled It’s More Common Than You Would Think was commissioned specifically for this exhibition. It explores McCurley’s family history – in particular, an incident when his grandmother was robbed and killed by an off-duty American soldier in Vietnam. Through tender, rudimentary pen drawings and a woven narrative, the artists sketch out the tragic tale. The text is written in a colloquial fashion that is eloquent in its ability to retell a story lost to family secrets, mystery, and untold truths. Like much of the exhibition, this piece retells history to offer a reorienting of the truth.

Life of a Craphead: Entertaining Every Second continues until October 20.
Truck Contemporary Art in Calgary: http://www.truck.ca/
The gallery is partially accessible.