The penciled-in premise of Museum London’s exhibition Lamina Stamina is starting to smear, echoing the inevitable off-gassing associated with the kind of plastic vinyl used throughout artist Kelly Jazvac’s career. In this survey of her work between 2008 and 2018, vinyl is draped, collaged, stitched, and even folded into intricate patterns. Her repurposed plastic now appears strange and weathered. What do we do with the material presence of what remains? The predominant feeling is one of inconvenience and guilt. The gnarled, wrinkled, lumpen shapes echo an exhausted utility and worth. The pieces are big and bulky, slippery and resistant; their material return can’t be ignored so easily. 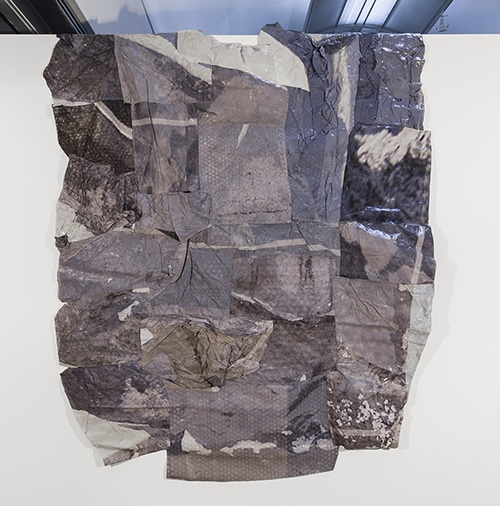 Made from discards destined for the landfill, Jazvac’s vinyl work reenacts and performs this imperviousness (or stamina) via forms that collapse into and echo entities like black holes, vortexes, solar eclipses, and the weather itself. Other manifestations mark territory by overlaying the wall like a second skin, mirroring the tone and colors of nearby works like a sensitive camouflage. Conversely, the amount of work present feels more like a sampling, reigning in pieces such as the otherwise towering Battle of Leisure. The installation appears at times like the dormant fun zones of an unoccupied children’s science center with sculptural works as discarded objects of play and learning. The gallery’s grey rumpus-room-like carpeting further contributes to this vibe.

In an adjacent space, Jazvac’s research-based practice is introduced via collaborations with the University of Toronto’s Dr. Eric Jackman Institute of Child Study, MSc student Anika Ballent, Dr. Catherine Neish from Western University, geologist Patricia Corcoran, cellist Marie Gélinas, and a group of young videographers. Their attempts to document ways to think and talk through environmental contamination become something alternately circuitous and slippery.

In Forward Contamination, a video made with Ballent and Neish, bits of plastic fused with natural forms (or plastiglomerates) are being singled out by touch – each piece placed with tweezers into a comet-like trail. Two voices discuss space treaties, panspermia, and how not to contaminate other planets even while we keep doing this on earth. The vague, crunchy sound of friction can be heard as tweezers sort through debris. When a drum kit starts up and begins to drown everything out, the conversation starts to break down, voices straining to be heard. The final thoughts become a yell, alarmed and sped up. What comes out of all this thinking? What can humans learn from contemplating all this “physical and ideological” contamination? A voice shouts: “I guess you have to count it!” The metaphor is clear: trying to take account of the pervasiveness of environmental pollution is akin to feeling your way through what has and is still actively accumulating, changing, and settling into irreversible sediment. Jazvac suggests that in the midst of all these conversations, we start with the feeling of what we participate in every day.