Berlin-based Canadian artist Jeremy Shaw’s Quantification Trilogy features three bold, mysterious, and mind-boggling films. Shown in Venice, Hamburg, and now at the Esker Foundation, the series examines a futuristic understanding of the human race. In each film, individuals who are what could be called “human+” or humans that have evolved beyond what the audience knows as humanity in the 21st Century engage in strange ritualistic behaviours that centre around movement and the imitation of the effects of psychedelics in order to reach another realm or stage of existence. All the films are set in the future; however, Shaw uses or mimics historical footage to create a compelling dichotomy between the themes in the films. 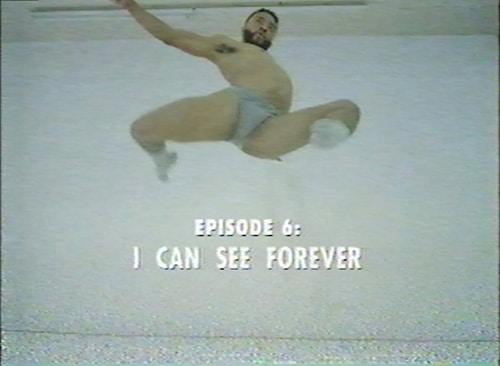 Each film posits movement as the means to reach alternative and transformative planes. The suggestion of how to lose oneself in any one movement, sight, or sound is a way forward in all three. Each ending or crescendo emotively draws out a spirit within the viewer, reaching our solar plexus and allowing us the opportunity to join in on this plane beyond a time/space continuum we can truly understand. Quickeners, Liminals, and I Can See Forever all feature visual effects that culminate in the characters ecstatically arriving at an alternate state. This is most clearly illustrated in I Can See Forever, which features a protagonist named Roderick Dale who is said to possess a fraction of what is called Machine DNA biology and has dedicated his life to dance. It is through this movement that he is able to, as he states, “see forever” and reach an alternate plane that is ecstatic, transcendental, and beyond corporeal. Through an ending of Muybridge-esque movement brought into a technological frame that seems inspired by Hito Steyerl, the viewer is completely drawn into this alternative world.