Visual literacy at its most complex is best understood with an analogy to poetry. A poem communicates through what is left unsaid. By reading between the lines, one can catch a glimpse of something unspeakable. The sublime horror and/or delight hidden under the cracks in the surface is too immense, ephemeral, and unresolved to put into words, but it’s out there. One only has to be open to piecing the elements together and allowing the poet to conjure connections. 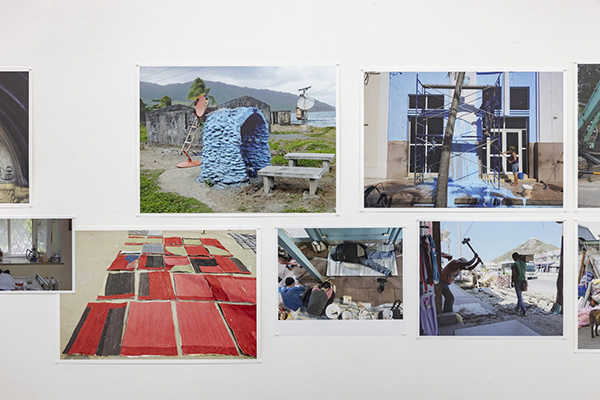 Vancouver-based artist Jayce Salloum’s panoramic photographic installation verisimilitude(s) and permutations at MKG127 is nothing less than an epic poem told by a globetrotting observer who forgoes objectivity to detail the impact of human endeavour on the landscape. Each image cluster or verse uses the equivalent of rhetorical devices – repetition, exaggeration, inversion – to create a series of temporary unities that tell familiar but uneasy stories about the places we inhabit. The collected landscapes are not idealized or cosmetic; instead they point to a planet in flux and under strain of powerful forces that bind history and capitalism.

From the ruins of earlier eras to the accumulation of commodities like cassettes and shoe soles, Salloum traces similarities from picture to picture. The colour of a lumpy and lumpen miniature concrete tunnel is echoed by the paint splattered across the wall of a building being updated in baby blue. Assorted interiors from stores to storage spaces to workshops conflate manufactured goods, mass consumers, and the meaning these objects hold. Museum simulations and pictures of pictures add a layer of mediation that must be acknowledged even when it isn’t immediately present. A series of aging urban spaces are masked by images within the image advertising newer, better housing soon to come and displace the current population. 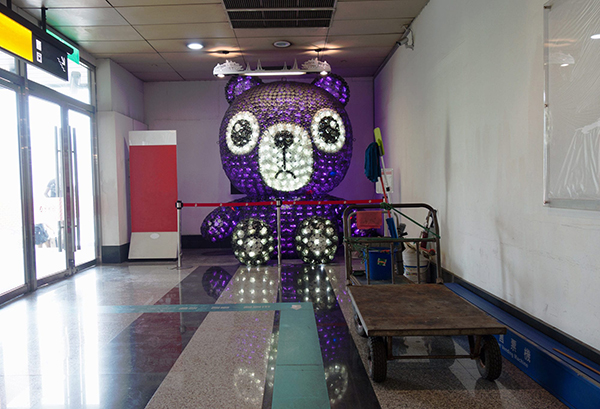 There are innumerable small narratives to chase down through the dozens of photographs that circle the gallery, but this latter collection of gentrification dramatized through advertising that envelopes the place it will recreate draws one’s attention to one of the larger themes at work. In a time intent on dismantling false and idealizing histories, colonialism and imperialism are shown here to be inextricably bound to the land. One potential, but lesser version of this work would be a tourist’s eye view of the world as an endless array of voyeuristic treats that celebrate the wondrous diversity of humanity while asserting we are all the same. Salloum resists that path. He titles each image with a detailed description of time, place, and circumstance to add context and direct our attention to the underlying forces at work that construct and control the corners of our world. A Soviet-era projector lies dormant in a Cuban projection booth, a glowing purple funhouse bear with an inscrutable expression is revealed to have been built in a Taiwanese prison workshop, a nondescript institutional hallway is identified as an interior within the Kamloops Indian Residential School that operated from 1893 to 1977.

The politics of place is the message of this photographic poem and it does a disservice to those subject to that application of power to treat their world as simply a point of interest. Salloum trains his eye on the human-scale aspects of an immense and ongoing historical thrust whose cresting and crashing wave we are still riding. For a momentary respite from this movement that allows for a necessary reflection on where we’re heading (by regarding the places from which we’ve come), it is worth lingering over these pictures, tracing their stories, and considering the weight of what they imply.