Jamie Ross at Galerie B-312, Montreal

Yesterday was the first time I left the city since moving back to Montreal a year ago. Leaving the city is a complicated and layered thing, and for those of us who live in cities, the chance to get out is often dependent on social networks, time, money, and having the mental space. Listening to the radio while driving through Winnipeg one day last summer, I  heard about a fundraiser to bring a group of Indigenous kids to the beach. It was so unsettling to hear this story and think about being on Indigenous land very near to so many beaches. Why did it take such an effort for these children to have the experience of being out of the city? Something felt amiss — which of course it was, and is. For the many who can’t get out, Jamie Ross’s video installation at Galerie B-312 and the accompanying programming goes some distance to extend its healing properties to us. 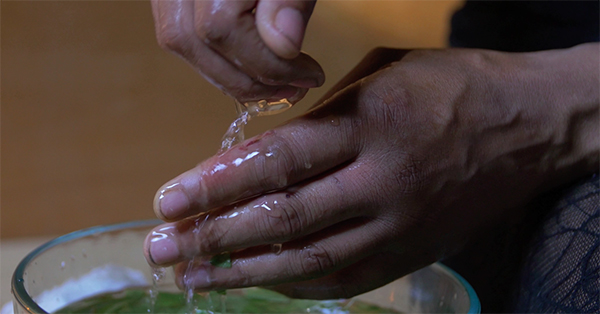 Tucked into the right side of the gallery, behind a curtain, Ross’s Cate Hill is curated alongside a complementary body of work by Maggie Groat in a two-person exhibition titled Living Entities, which is also part of Momenta Biennale’s overall thematic The Life Of Things. Light from the projection co-mingles with the larger exhibition space but accumulates in greater concentration on a rich black velvet moon-shaped bench and central hexagonal plinth, which holds a glass fermenting jar three-quarters full of dewy golden liquids, embellished by ribbons and rope that reference a healing tradition from a region in the Scottish Highlands connected to Ross’s patrilineal lines.

The nineteen minute video that forms the centre of Cate Hill is an intimate portrait of intentional living in a non-urban Radical Faerie sanctuary. Queer, platonic intimacy, the kind referenced by Michel Foucault in Friendship as a Way of Life, is of central importance and expressed in two primary sets of relationships. One is between three women from three different generations, including Elka Schumann, founder of the radical theatre company Bread and Puppet. They sing a familial song together in Russian while two peel apples and one winds yarn. The other relationship features two central figures, Marie and Mixy, who are seen walking hand in hand, embracing, performing rituals, and engaging in contemplative poetic discussions. Layered into the notions of queer intimacies are the limits and possibilities of escape that importantly ground an otherwise utopian vision. At one point in the film Marie discusses the dual meaning of the French word consecrer as rooted in the verbs “to bless” and “to sacrifice.” In her grappling she arrives at the idea that, “we can’t step outside the cycle…We’ve taken so much for so long… At some point you have to lose something. There has to be a trade.” In his writing about the film, Mark Ambrose Harris grapples with a similar query when he asks: “can we be romantics as we race extinction?”

Textures, repetition, and materiality add further layers to the reading of Cate Hill, placing us in relation to the cycles of the seasons, animals, and plants that we all co-exist with. References to fluids and fluidity play on the slippages that queer life and relations rely on, as well as the materials that are so central to the fall equinox, where the fruits of summer’s warmth, light, and generosity emerge before retreating for the winter freeze. There is a transportative quality to the installation that reminded me to raise in question form what Mixy so confidently proposes as possible: Can we “reclaim our bodies”? Can we “break the disenchantment spell that they’ve cast on us”?

It is rare that a work conveys its intended meaning once it enters the gallery space like Cate Hill does. The textures, gestures, movement, colour, and sound Ross cultivates within the video coupled with symbolic references to the moon, fruits of harvest, and ritual bring me as close to the sanctuary as possible without actually going. As a queer person and member of fringe movements like the Radical Faeries and paganism, Ross both understands the dual reality of the fringe as an important space sheltered from surveilling gazes, but also an often inaccessible one with its own inherent vulnerability. In this respect, Cate Hill at once protects these fringes, while making them just knowable enough.