In a version of Michael Snow’s film Wavelength called WVLNT (Wavelength for Those Who Don’t Have the Time), a tedious 45-minute zoom across a New York City loft in the 1967 original is mercifully shortened. Three senses of the term “wavelength” are still given – light from a window intensifies as the camera zooms, a low hum turns piercingly high-pitched, the view finally settles on a small photograph of waves in the ocean – all in a manageable fifteen minutes. Ismaïl Bahri, James Benning, Miriam Sampaio, and Ralitsa Doncheva’s works at Dazibao use the devices of overly ponderous films like Snow’s to convey the historical experience of eccentrics, dissidents, cultural hybrids, and margin-dwellers. 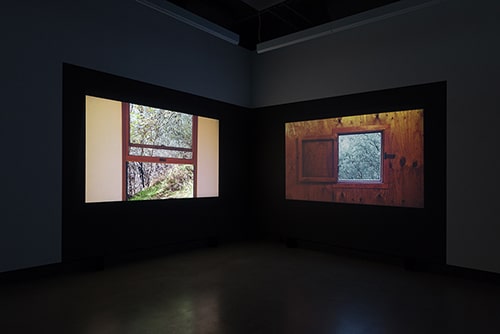 A low-fi “Strawberry Fields” interlude and the highly unconvincing death of a man at halftime are my favorite parts of Wavelength – signs of the heady moment in which the film was made. Bahri’s Denouement also shows history intruding on a tightly controlled film structure, but the times have changed. It opens on a shot of a black string dividing a wintery backdrop. With one end fixed under the camera as the other is wound around the fingers of a slowly approaching figure, Snow’s priority of apparatus over subject is reversed. Bahri closes the gap with creeping fingers rather than a disembodied zoom. The slip from a bisected abstract space to an uncomfortably interpersonal one points to a “rapprochement between all things” – a cautiously optimistic message about postcolonial relations given the artist’s Franco-Tunisian identity.

In the next room, Montreal-born Sampaio’s I am the Daughter of Dead-fathers shows images of a Lisbon detention centre where her father was likely held for anti-fascist activities in the sixties. The Jewish-Portuguese family history she commemorates is under threat of being lost since the prison was converted into luxury apartments. Grainy images of the prison’s daunting walls and stairs and hopeful windows are projected in spectral form throughout the gallery, suspending us between the positions of heroic political prisoner and anonymous condo tenant.

Of all the works in the exhibition, Benning’s Two Cabins comes closest to the structural film tradition in its rigorous composition and near total lack of incident. Like Sampaio’s work, Benning’s exploits the gallery’s nooks to lure, then crowd us in, but the point of view we assume is neither heroic nor anonymous, and more circumscribed. The two films projected into a corner were shot through windows in replicated cabins of the American writer, naturalist, and anti-segregationist Henry David Thoreau and the infamous “Unabomber” Ted Kaczynski. Stuck in an archetypal American hermit’s room, we’re left to meditate on the common cause of a murderous luddite and a poet-philosopher. 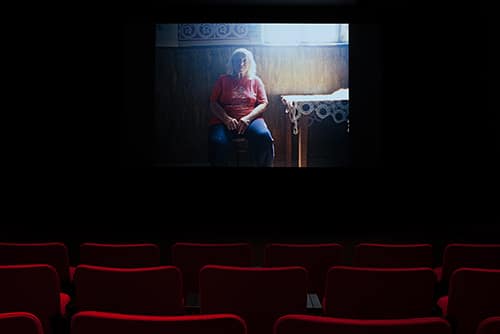 Montreal-based, Bulgarian artist Doncheva’s films are the most generous in the show. Warm, textured, and attentive to environmental detail, these films are carried forward by images of tiny and epochal change. At every turn, the filmmaker’s implication in a fraught cultural history is clear. Where Benning and Sampaio use windows to signify absent points of view, hers are floodgates or portals. The force of attraction in her images of shimmering caught flies in a Bulgarian monastery (Baba Dona Talks with the Wolves), a Soviet monument taken over by wild horses (Desert Islands), or a forlorn girl at a folk-dance studio in Kiev (Unfortunately it was Paradise) is felt in weighty presence and testimonial value.

The monastery is home to the elderly recluse Baba Dona, but she is no relic. Her lovingly recorded routines – chopping wood, preparing food, setting traps for flies that look more like angels than insects in the film’s ethereal light – are presented as ritualistic, assertive, and future-oriented. Buried under a layer of graffiti (including an ironic white-on-red “Enjoy Communism!” piece) and guarded by a mare feeding her young, the Soviet monument is encountered in a “road trip film” featuring Doncheva and her father. As the pair move through a changed Bulgaria, the binary logic of the Cold War is replaced by messier oppositions between nature and culture, and parent and child. The girl in the Kiev studio wasn’t supposed to look so out of place. This and other clips edited for Unfortunately it was Paradise came from an archive of 1970s communist propaganda films in which representations of community and industry were to dominate.

The artist’s reframed and slowed-down “portraits of peripheral characters” anticipate a more individualistic life after communism marked by lonely stares, hurried commuter walks, and occasional fugitive smiles. Born two days after the fall of the Communist regime in Bulgaria, Doncheva engages with receding figures of “patriarchal authority” in a post-Soviet history to which she lays a tentative claim. The artists in the show owe a debt to a similarly male-dominated history of structural and experimental film, but make important steps beyond it, impatiently perhaps, in search of stories that Snow and his peers didn’t care to tell.