Do you know your HIV status? In 2008 I co-curated a public art and performance exhibition where Vincent Chevalier created the performative vinyl text Wait. Installed in a very public corridor of Concordia University’s Engineering and Visual Arts building, the text read as follows:

wait for an appropriate moment / disclose your hiv status / wait

I recall watching my (cis hetero) friend encounter the text. I watched as he read it, calculated his response, and then happily blurted out, “Negative!” To which I responded, “When were you last tested?” He couldn’t remember.

Every aspect of this moment speaks to the socio-political status of HIV and AIDS: who is assumed to be a potential carrier, who has responsibility to disclose, what spaces are safe or appropriate for disclosure, what bodies are held most responsible/feel most responsible/are most at risk? With a similarly disruptive impulse as Wait, INTERVENTION: The HIV Howler is posited as an intervention into the curated cycles of LOOSELY ASSEMBLED, a series of programs organized by SBC Gallery 2019-2020 Curator-in-Residence Danielle St-Amour.

At the centre of the intervention is The HIV Howler: Transmitting Art and Activism, a limited edition art newspaper “focusing on global grassroots HIV art and cultural production” edited by queer artists and cultural workers Anthea Black and Jessica Whitbread (it can be purchased at the gallery and online at Art Metropole). By exclusively publishing content by artists living with a positive diagnosis, the publication resists tokenization and offers an alternative to medicalization, creating a platform for dialogue across linguistic, cultural, and geographic borders. Conversations, interviews, essays, artist projects, and full colour documentation of exhibitions and performances fill their pages, leaving us with an important index for the present and rich archival material for the future.

The newspaper takes its position in the gallery amid architectural, archival, and diagrammatic elements that remain as traces of LOOSELY ASSEMBLED’s previous incarnations. Partway through the long side of the inverted L-shaped space sits a rectangular, low-lying plinth painted a medium bluish-grey holding multiple stacks of the latest edition of The HIV Howler, Movement + Migration, freshly printed and mostly still fastened together. The plinth and paint, which extends across the floor, are traces from CYCLE 3: J’ai besoin d’a Of North 1986 – The Shanzhai Lyric. Above the plinth, a suspended clothes rack, also from CYCLE 3 is now repurposed to display copies of all four editions of the publication draped over the central rod. In the far left corner, disassembled pages are collaged together; pastel red, blue, green, and purple distinguish the editions. From a distance, the sheets take on the aesthetic of wheatpasted posters – an appropriate formal nod to Whitbread’s work with POSTERVirus.

As I moved closer, my eyes drifted over the paper’s bylines, which began looping together at my discretion like found poetry: Tiger Blood, Dead Flowers, When Do I Tell Her, Now. Corresponding to the publication’s formal adoption of the daily newspaper, the intervention’s installation mimics urban codes related to print media: the newspaper kiosk with rows of papers neatly displayed, the hopeful and/or burdensome bound stacks waiting to be opened and sold, posters pasted obsessively on walls “howling” to anyone who will listen. 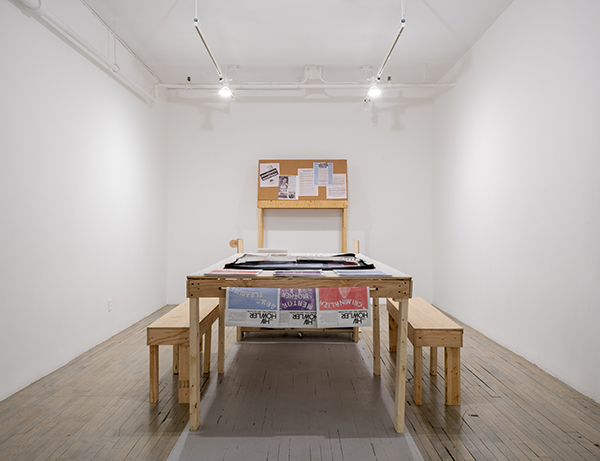 On a central DIY research table in the bottom part of the gallery’s L is a large black portfolio with texts from previous cycles and three issues of the newspaper. Pinned to an upright structure from CYLCE 1: COLLECTIVE QUESTION is archival content related to Manifeste Montréal, an essential moment in AIDS activism that resulted in a protest and an “accompanying manifesto of demands…published by AIDS ACTION NOW! in partnership with ACT UP and Réaction SIDA.” The inclusion of archival materials and the container of LOOSELY ASSEMBLED situates the intervention in the context of Manifeste Montréal’s 30th anniversary, drawing conceptually potent lines between The HIV Howler’s careful aesthetic choices – from design to editorial – and a lineage of artists creating and holding space for those living with, and communally affected by, HIV and AIDS.

LOOSELY ASSEMBLED is positioned as a series of cycles. In conscious differentiation from standard installations, each cycle is built from and in relation to the previous cycles. As an intervention into this flow, the actual experience of INTERVENTION: The HIV Howler in the gallery space is a bit tough. The abundance of text and disparate elements require sustained investment from its audience. There is a kind of FOMO built into the exhibition design. It is clear you have missed something – or many somethings. But in that also lies the promise of more. As an intervention into the larger curatorial project, I read this current exhibition as an active pause, reliant on a combination of restfulness and alertness. The strength of both the broader framework and the intervention is arguably in its mutual vulnerability born from active reliance on viewers’ curiosity and ongoing engagement – like starting a sentence without fully knowing where it will lead, but believing the person in front of you will have part of the answer.