Heirloomic at Support, London, ON

Heirloomic is loosely defined in Support’s exhibition text as “having some characteristics of” or “in the form of an inherited quality, tendency, lesson, skill, or affinity.” In divergent, yet similarly indirect ways, contributing artists Jamelie Hassan, Anna Szaflarski, and Stacey Ho respond to this premise by considering the notion of “heirloom” as both visible and invisible presence, a conduit to past experiences and hidden influence, and inarticulable (or obscured) memory. 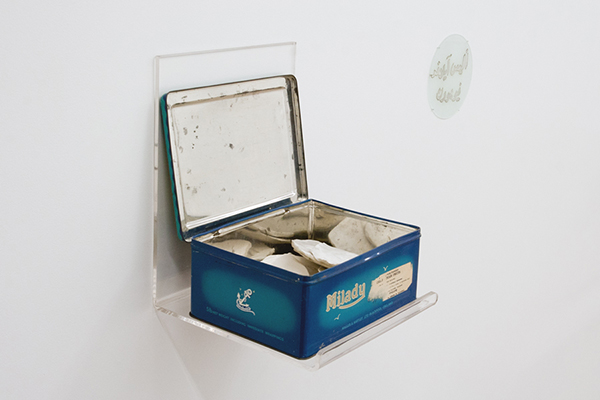 Two small heart-shaped mirrors inscribed in Arabic anchor Jamelie Hassan’s installation, signaling the beginning and end of a journey. Eight similarly inscribed glass discs (mirrored text on matte white), a confectionery tin, a small hand-painted ceramic tile of a railroad track in the snow, an old photograph of three men in white around a marble counter, and a textured white “snowball” sculpture stretch across the expanse of a long wall. These objects mark out the journey of Hussein Shousher, the artist’s grandfather, who traveled from Kar’oun, Lebanon in 1901, to Ellis Island, New York in 1902 (where he was given the name Sam Hallick), then onward through Canada and the USA. Settling in Sioux Falls, South Dakota, Shousher opened The Snowball Cafe, an ice cream parlor, in 1917 (featured in the photograph). The tin is filled with ceramic multiples embossed with hand shapes, each with an eye inside its palm (the symbol of the Eye of Fatima, believed to protect against the evil eye). Produced by Hassan and given to gallery visitors as a keepsake, the ceramic multiples combine an Arabic amulet for protection with the artist’s memories of making hand-prints in the snow as a child. While each object symbolically maps out a journey of displacement, loss, and community across vast distances, immense weight is felt in the empty space between each marker, evoking gaps in memory, or the gaps between personal and dominant cultural histories.

A narrow-waisted garment hangs next to a watercolour painting by Anna Szaflarski. The red velvet traditional Polish corset with beaded floral designs was made by the artist’s grandmother, Stefania, whose bold, experimental skills in ornamentation were in stark contrast to her tendency to balk from public and social displays. This simultaneous desire to perform, yet hide away, reappears, however unconscious, in Szaflarski’s recent work. The watercolour painting tells the story of a central, creaturely figure encircled by rows of onlookers in arching, dramatically curved pews, all upon a stage backed by red curtains. An oversized blue hand reaches down, either to secure or upend the entire scene. On the lower left and right sides of the painting are large areas left unfinished, yet with carefully and meticulously defined edges. With dream-like logic, the creaturely figure seems placed, doll-like, within a setting controlled by a larger force, while the surrounding architecture is left unresolved, even as it continues to follow the same formal order.

Stacey Ho, Prescription #18: Nutrition for the Heart, 2019, pencil and eraser on wall

Across from Hassan’s installation is a list in Chinese letters written in pencil upon the wall. The list is covered in debris as if erased and rewritten multiple times. Copied from a zine of Chinese medicine created by Stacey Ho’s paternal grandfather, Ho Kam Min, the list is #18, a prescription that translates to nutrition for a “disquieted heart” (“heart” also translates here to “mind”). Next to the list are two digital prints: photos of a photo by Ho’s maternal grandfather, Au Man So. The photos, at first in focus, then blurred as if captured in motion, depict the silhouette of a boat at sea against an orange-red sky. Both list and photos gesture towards the process of transmission – of memory, of history, of familial influence and translation – and its ephemeral affect. They also speak of the compressed, abstract results inherent in transferring one kind of material – in this case, the psychic material of an heirloom – into the static material of an installation. Ho approaches these fleeting, fragile evocations with a deliberate and respectful distance, allowing viewers only a bare minimum of information. As an additional shared act of transmission, the artist plans to collect the ingredients from their grandfather’s list and serve the resulting tea at a closing reception (taking place on September 28 from 4 to 6pm).

For viewers seeking more backstory, Support’s otherwise minimal ethos is supplemented by several contextual publications including MATERIALS, a “collection of references,” images, and text provided by the exhibiting artists that includes photos of Hassan’s first trip to Sioux Falls in 2019, an English translation of each item listed in Ho’s transcription, and Szaflarski’s comparison of illustrations of Polish embroidery with Chiroptera (bats). More often than not, piecing each story together becomes an oblique, poetic experience, calling inevitably for more intuitive, intimate connections than historically-grounded ones.