In geetha thurairajah’s current solo exhibition at the Kitchener-Waterloo Art Gallery, painted figures, objects, and the landscape itself tell stories not only through the artist’s careful choice of symbols, but in the way material both enacts and interrupts the smoothness of narrative. Displayed on freestanding panels arranged in the attitude of folding screens, six paintings point inwardly towards a center where a single painting leans casually against the wall. This open installation performs a turning away from the authority and conventions of wall-work, while asserting a non-linear sense of the paintings’ chronology. The Rimbaud poem quoted in the exhibition’s title Migration is more momentous than ancient invasions hints at heightened states through an invocation of an idealized idea of the artist who calls for the abandonment of “old bodies” for new intensities. thurairajah’s use of this quote links to her own research and material practice in which a personal art history mixed with the fragments of old stories might replace “invasions” of Western art narratives. 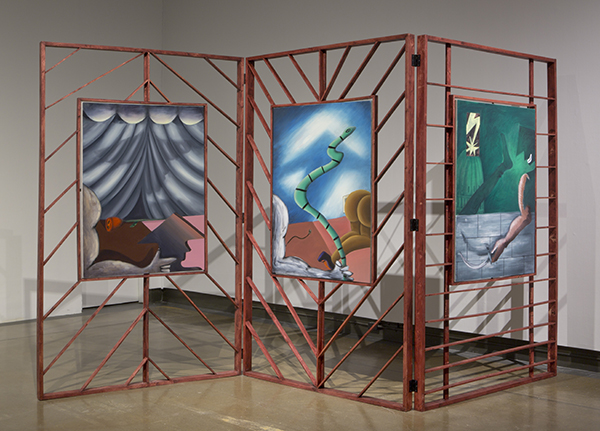 Working in a space of tension between Western painting motifs and symbols from her Sri Lankan heritage, thurairajah allows her paintings to exist within the energy of conflicting worlds. In a painting called if you’re fixated on the past you’re depressed, if you’re obsessed with the future you’re anxious, day versus night sharply divides the image in two, while a snake connects both spaces with its looping length. A dark figure in the background mirrors the bold movement of the snake, briefly morphing snake with human. thurairajah uses this mimicry and doubling again and again in other paintings, playing with compositional and narrative coherence by treating each object, surface, or figure as a slapstick, self-mocking prop. A bonfire mimics the jagged, chunky forcefulness of the surrounding vegetation, or the aggressive gesture of a muscle-flexed arm is mirrored by other, equally truncated body parts. thurairajah’s paint handling, wherein airbrushed shapes contrast and collide with more painterly, sometimes thick and encrusted shapes, further exaggerate this physical humor. 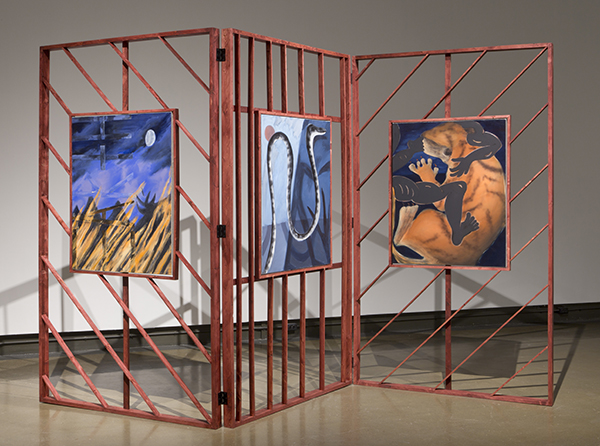 Referring to her painted subjects as “shadows” and shapeshifters, thurairajah relates this idea to the Southeast Asian figure of the mahout, “a caregiver and trainer of elephants” and a “specter” whose simultaneously ominous and playful presence is hinted at in the space of each painting. Often relying on the way shallow, cartoony, chameleon-like surfaces can point to and alter recognizable symbols through abstraction (performing as shadows of recognizable things), in paintings such as Purpose, Purging and Politics, and I crawl on the ground and rise on a pillar, thurairajah allows the materiality of painted space to play out this transmutation in a more complex way. In these paintings, figurative fragments seem to simultaneously emerge from and disappear within the very atmosphere, leaving traces of previously materialized shadows and limbs behind, suggesting that material used in the past always affects (and accompanies) physical manifestations in the present. Through this active awareness and utilization of painting’s temporality, thurairajah speaks of the material, physical effects of stories and identities that emerge through an act of searching, where the messy, slow process of world-building is favored over faster, more immediate surface appearances.