Many musicians turn to monikers or even use sound processors like auto-tune or the vocoder as a veil through which they can emerge from their discursive selves. Christo and Jeanne-Claude have likened their monumental landscape and architectural wrappings to that of a second skin. They reveal as much as they seem to obscure. In many respects, our skin, like the clothes we drape ourselves with, demarcates the physical limits of our being. Like fabric, the skin is a membrane that creates a division between the material world and our constructed image of it. The body is a site of social, personal, and cultural performance akin to the physical landscapes Christo and Jeanne-Claude accentuate as stages for their drapings. 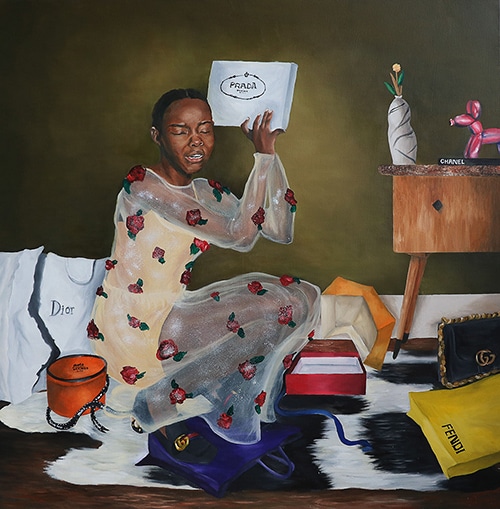 Ekene Maduka, This isn’t everything, oil on canvas

Flux Gallery’s recent exhibition Gather is an ensemble of works that delegates the meeting point between how a portrait is formulated and what role garments play in that formulation. Niamh Dooley, Emma Mayer, Hassan Ashraf, and Ekene Maduka all contribute images in which the figure is a point of focus – either of themselves, family, friends, or fictional selves. Ashraf also offers a poetry reading performance in Urdu wearing a shalwar kameez similar to his photo tableaux series where he inserts his presence amid different architectural sites across Winnipeg. Ashraf’s voice and unwavering physical presence both in the gallery and in the backdrops of the photos act as gestures of committed dissonance and refusal to blend in with the casual hegemony within which he positions himself.

On the other hand Dooley paints across three canvas panels and rightfully mythologizes her family by situating three female figures front and center. The central figure is cast against documents on the Indian Act and she’s bookended by the other two women dressed in their court uniforms positioned in a commanding stance of a sentinel.

Maduka luxuriates in fantasy and extravagant ideals on the surface of her canvas. The result reaches euphoric and surrealist heights. Like the paintings of Sam McKinniss, Maduka’s piece here exudes ebullience and is just a little bit off kilter for good measure. It epitomizes what writer madison moore describes as “political glitter bomb” in his idea of fabulousness from his book of the same name.

Mayer unabashedly elevates the everyday people close to her by putting their faces on custom-made shirts with an unironic 1980s-inspired cutesy pink ribbon. These handmade dedications are like treasures a teenage fangirl might meticulously compose for a beloved teen idol, except her obsessions are just her friends.

In moore’s book, he details the aesthetic of fabulousness as a result of struggle, suppression, anxiety, survival, and resistance. Entering the world appearing fabulous is a risk. But it’s no riskier to do otherwise. Like Christo’s landscape interventions, the artists here intervene in their idiosyncratic ways and move through the world untethered – whether they steadfastly exhibit their inner exuberance, refuse to assimilate, spill out their schmaltz, or just simply be in spaces they aren’t expected to be. They choose to veil themselves with a second skin that brings forth otherwise suppressed desires that help shape a formidable portrait.

Gather was on display from July 26 until August 16.
Flux Gallery: https://www.aceart.org/flux-gallery
The gallery is not accessible.