You can spot a work by Dee Barsy anywhere in Winnipeg (or elsewhere) and instantly have no doubt that it is hers. Over the last half-decade or so, she has gradually honed in on a painting practice that is uniquely Barsy. Part of what makes her work so immediately identifiable is her perpetual use of a variant of blue that veers somewhere between teal, turquoise, and aqua hews, depending on the lighting conditions you view it under. The other part is the polyrhythmic compositional flourishes of coloured geometric shapes that either prance, pile, or float in mid-space like confetti cascading from the sky. 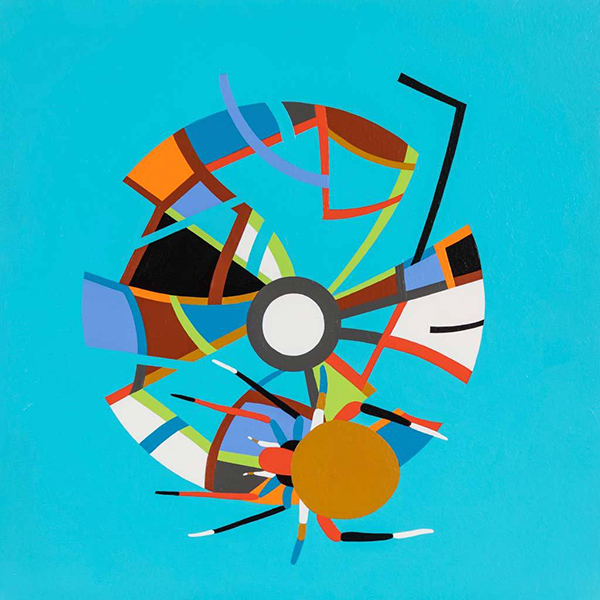 Even as it takes the form of murals, wall panels, and, at times, relief sculpture, Barsy’s work maintains its idiosyncratic logic through subtle thematic deviations. Her solo exhibition These Tiny Helpers / Agaashiiwi-wiiji’iweg / Ókik ká yá apisísisicik owícihiwéwak at Urban Shaman takes everything she’s done before and augments it to fill the room. What we know of her stylized, flattened forms and depictions is still here, but now they are on every corner of the gallery’s architecture. The white-walled space from before isn’t recognizable here; instead it is replaced with what Barsy has orchestrated.

We aren’t just viewing frontally, but from all sides. It’s as if she’s been trying to figure out how to bring us into this abstracted world she’s only hinted at two-dimensionally. Now, we can enter into the sprawl of it with all its twisting expectations. It is saccharine and dreamy like a good melody, but just as complex. Like her previous wall works, you can easily mistake the fragmented tumbling bits of colour forms as spontaneous play. A longer view reveals how controlled and meticulously composed each untethered part aligns with the other.

The title of the show refers to several species indigenous to the Manitoba and integral to the tenaciousness of its ecosystem. Instead of any one-to-one depiction of this, the artist renders them in ebullient subjective colouring. They add to the alluring immersion through which we wander. Much of what Barsy continues to render aren’t things as they already appear around us, but, in the same token, what she ends up with is not completely removed from our sense of familiarity. In all the ways so much can be contained within the boundlessness of abstraction, Barsy enters this shifting site and allows her paintings to become many things all at once.