Religious iconography adorns the walls and surrounds an installation of familial objects, including a lamp, rocking chair, table, and television set, in the Alberta University of the Arts’ Marion Nicoll Gallery exhibition El Barrio by Daniel Beanmash. However, the scene is slightly off putting. The furniture and religious objects have been tagged with spray paint and the graffiti lends them an ethos of destruction and abandonment. The television plays a recording of the 2018 protests in Nicaragua that left 317+ people dead. Paired with these stark and violent images, the cheerful 1947 song Me Voy Pa’l Pueblo (I’m Going into Town) by Mexican trio Los Panchos is heard in the background. The protests began as a result of social security reforms brought forward by then President Daniel Ortega. At the time he had increased taxes while simultaneously decreasing benefits. 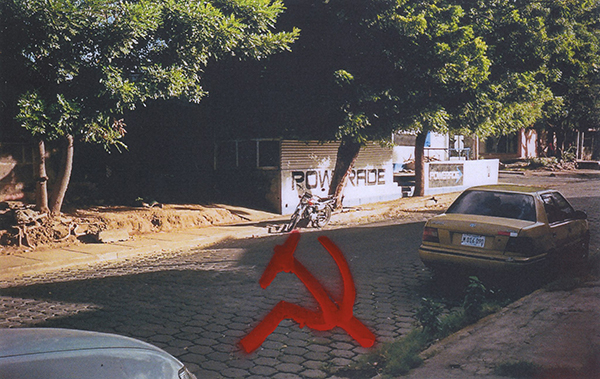 El Barrio translates literally as neighbourhood, while pueblo translates as town. The significance of these terms encompasses the social construction of space, place, traditions, culture, and even artistic symbology for the population. Beanmash’s exhibition ties in the compelling psychosocial structure that el barrio and pueblo hold in Latino culture with a destructive bent, as seen through the pairing of a familiar scene one might find in any home with the destructive action of vandalizing the space as a political and social move.

Legible words such as “meurte” and “viva Daniel” are included amongst the obliteration of religious imagery. The visage of Jesus is obscured with a smear of red spray paint that drips over his entire figure. In this way, El Barrio becomes a political statement. There is something sad yet heartwarming about the installation: combining a cheerful tune with the imagery of the protests and an abandoned family home brings Beanmash’s message to the fore. He tears down the barriers to fully acknowledge the chilling story behind the exhibition: one of death and destruction within the face of political and social structures.

Daniel Beanmash: El Barrio continues until May 3.
Marion Nicoll Gallery: https://marionnicollgallery.wordpress.com/
The gallery is not accessible.