My round-up last year included an exhibition I wanted to write about, but for whatever reason, never managed to. There is always something that grasps my attention and then disappears through the cracks. In the case of Derya Akay’s Green Grocer at Unit 17, I contacted the gallery a couple of months ahead of time to ask when the show was on so I could get a sense of when and where my writing might happen. Described as “part fictional grocery store, exhibition, studio, kitchen, a basket, a garden, a wall and a window” and a “framework” for the artist, I wanted it to be all those things (especially a basket). While the gallery space itself displayed text, 3D-printed objects, fermentation, floral arrangements, fruits, and other things to be eaten, Unit 17 was also uniquely outfitted with a kitchen and garden that was as integral to the exhibition as the gallery was to the display of art. Cooking and gardening informed the activities and socializing energies that permeated the duration of the project. Dinners and birthdays were hosted, people seemed happy to be there most of the time. My idea of a successful summer show! Despite my full intention of writing about it, why didn’t it happen? The exhibition had a utility and eventfulness to it that felt more legible as a sincerely nice life than as art, and I wanted to steep in that feeling for a bit longer. Now that some (but not all) of the writing is happening, my attachment to it as a critic commands that I encounter it through the languages of art. So, thinking of Akay’s exhibition as a sourcebook of hospitality, invitation, and nurture, the context of art provides an opportunity for pause and a foil to see Akay’s directness and pleasure towards food and plant realized with a poetics of subsistence via low-key gathering. 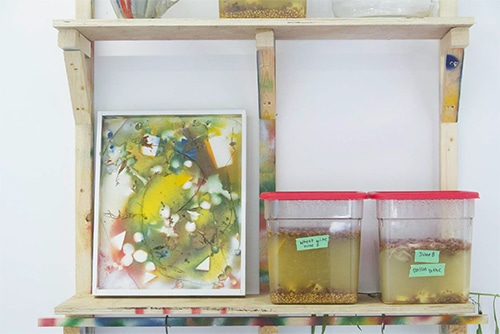 The Writing Table was a series of writing workshops hosted at the Or Gallery and organized by curatorial resident Weiyi Chang. I think we are in agreement that art writing requires some demystification to broaden the field and encounter perspectives unhampered by the pressures to perform a certain discourse. Meaningful art writing is not simple contrarianism, evasive poetics, or superficial critiques of capitalism (or critiques of critiques of capitalism!). The series included workshops led by practicing artists (Tiziana La Melia, Lucien Durey, Maryse Larivière), curators (Nasrin Himada), poets (Shazia Hafiz Ramji), and editors (Sky Gooden) who elaborated on their approaches to writing as both freedom and task. This diverse arrangement was apt in illustrating the largely decentralized tendency of art writing practices, especially in Vancouver. It is one thing to read and write well, another to contribute discursively, texturize a field of voices with one’s own, and at once amplify others while sustaining more than one practice. It’s a necessary interdisciplinarity. The Writing Table carved time and space to reflect on the strains of production and how they influence the landscape of text.

Artworkers and their work can be seen at every exhibition, public program, workshop, reading group, screening, and performance. It is visible in the semi-polished, yet still imperfect seams and attitudes of institutions that rely on their labour, and in the overworked energies of arts administrators, art handlers, development coordinators, communications liaisons, and curatorial assistants on short-term contracts. Awareness of the limits of labour being pushed, boundaries being circumvented for means of living, and abuses of power and influence is way past burgeoning. However, the material realities of working in art institutions require mobilized articulation. I can guarantee that critics and art theorists will publish more anthologies on Post-Fordist art economies or protest aesthetics, but it has gone much, much further when art workers directly communicate, advocate, organize, and protect one another from abuses of power, neoliberal work environments, and rental injustices.