A wise Vancouverite once said a life in the arts is a life of mimicry. This past year, I often felt a cognitive strain from experiencing artworks with a certain bewildering déjà vu. Of course there’s an inevitable mirroring at the crux of contemporary art that can be genuine and productive, but I regularly caught myself yawning and disaffectedly half-looking at arid, wishy-washy derivatives presented as art in 2018. However, this year’s three highlights were stories of artists, curators, and organizers rising to the occasion and unrelentingly doing the most above all turns.

There was a palpable pulse to Logan MacDonald’s The Lay of the Land installation at aceartinc. in the spring that continues to reverberate in my mind. Entering the exhibition without any inhibitions, I was immediately arrested by the layers and layers of sprawling photo material and the terrains they attempted to map out. It was a show that demanded multiple revisits. The four or so weeks it was on certainly wasn’t enough time to sit with the work. With each visit you found yourself discovering the dense lattice-work of the exhibition anew. At its heart was an artist self-untangling in physical space. It was every bit as unflinchingly introspective as it was dialogical.

The act of making room for others to be seen, to freely experiment, and for discovery is a noble act of empathy, especially in a world divided by individualistic pursuits. And so when small independent artist-run organizations and project spaces sprout, they become fodder for the larger cultural narrative. This year Blinkers created a confident new entry for a city and an arts community that undoubtedly needs it. Initiated by four friends/artists, Blinkers has already positioned itself as an intermediary for critical conversations happening in Winnipeg and elsewhere. Since its opening, it has presented exhibitions, talks, and one-off events by and for artists and thinkers across the country. They are in their very early stages and still have more to offer, but if any of what they’ve done thus far is an indication, then it seems like the possibilities could be infinite. 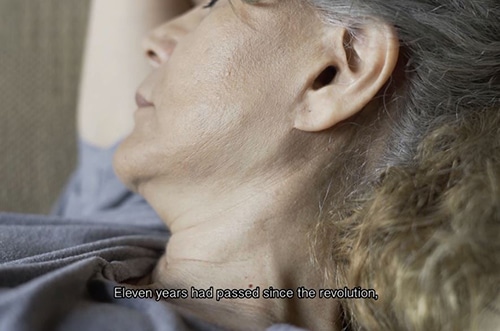 Use of the word “resistance” reoccurred this year in different contexts. It shouldn’t be a surprise to see it as a response to what feels like a whirlpool of global political happenings, much of which seem to be out of any individual’s control. But resistance can take any number of forms and I can argue that all three of my picks for 2018 are in some small way driven by it. This was especially so for Not the Camera, But the Filing Cabinet curated by Noor Bhangu at Gallery 1C03. The hugely varied and compact exhibition brought together a cosmopolitan group of artists including Susan Aydan Abbott, Jade Nasogaluak Carpenter, Sarah Ciurysek, Dayna Danger, Christina Hajjar, Ayqa Khan, Luna, Matea Radic, Sophie Sabet, and Lessa Streifler. A testament to the unending magic of collaboration between artist and curator, and an embrace of opposite experiences towards a unified vision, it spoke to what it can look like when female-identifying and gender-defying bodies’ archives are substantiated through performativity. That in and of itself is undergirded by a penchant for resistance.

Lastly, I would like to send to a few special shout-outs to folks who one way or the other have been of impact this year. To Marijana Mandusic for hammering down three wonderful shows throughout the year, kudos! To curator Sarah Nesbitt, your time in Winnipeg was short, but you’ll be dearly missed. To my editor Terence Dick, for being patient and making me readable throughout year. And to Christian Hajjar, for being a trooper and for insistently pushing femme, female-identifying, and diasporic voices forward through your publications. RIP to James Luna and Jack Whitten, the world will not forget you. 2019, do your worst.