Common Place: Common-Place and In & Out of Saskatchewan at the Art Museum, Toronto

Perhaps it’s a professional bias, but I don’t think curators should write. Leave the writing to the writers and stick with doing whatever it is that curators do. That is, give us things to look at and think about, but don’t make us read your explanations. Not only does that ruin all the fun, but it undercuts the authority of your essential gesture: bringing stuff together to generate meaning. Have faith in that and the viewers will manage. The work does the work for you. At least, that’s what I was thinking when I visited the Art Museum at U of T to see two exhibitions curated by Curatorial Studies Masters students. (It should be noted that I raised another concern about art and writing two years ago in response to the U of T Masters of Visual Studies MFA graduation exhibition, but that doesn’t mean I’m out to get my alma mater. I see textual interference in exhibitions all over; it’s just that local grad shows provide the clearest opportunity to see these habits in action and also explain where they emerge.) 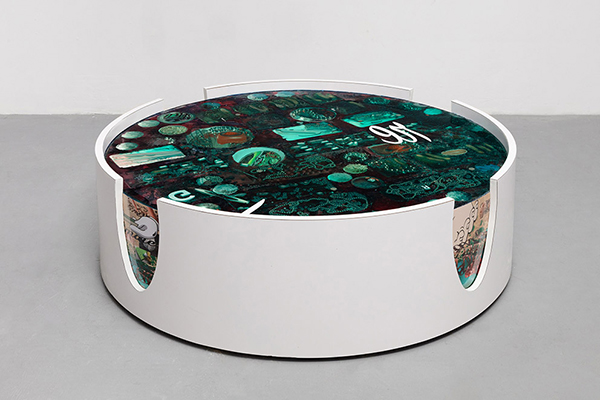 Common Place: Common-Place, curated by Lillian O’Brien Davis, is an excellent demonstration of what good curation should accomplish: creating a whole greater than the sum of its parts. Catherine Telford Keogh’s circular slabs of stuff are the introductory and central gesture to this end as they present the same argument in microcosm. These dense assemblages (check out the list of materials in the example included above) are composed of seemingly random stuff (soap, straws, pickles, Chicklets) that mean little on their own, but when they’re encased in green Plexiglass and set within giant ashtrays, the refuse inevitably accrues an implication of meaning. And so the investigation, interpretation, and contemplation begin. Set up against similarly heterogeneous works – Patrick Cruz’s wall-painted intervention, Sojourner Truth Parson’s pink stucco and canvas cut-out paintings, and Walter Scott’s silicone and concrete-based stick figures – an energizing conversation begins about the ways in which we cobble together meaning from the stuff at hand. Erika DeFreitas’ disconnected dance on video with an unforgiving chair is the odd one out in this otherwise convivial collection. While the references to Édouard Glissant in the exhibition text provide a contextual garnish, there is enough going in the gallery for a hearty meal. 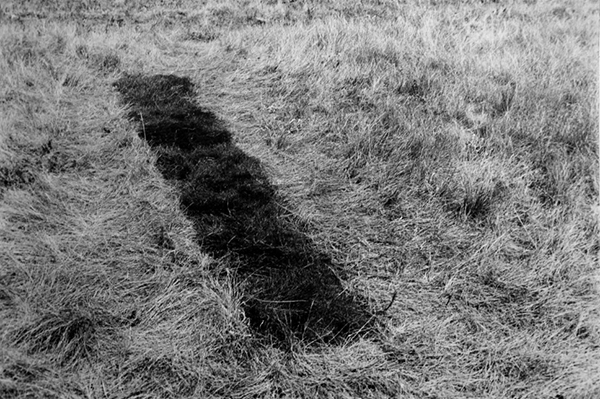 In & Out of Saskatchewan, curated by Kate Whiteway, relies on historical context rather than theoretical support, so the curatorial contributions lean more to the informative and away from the explanatory. That said, there is a reward in perusing the exhibition first without reading any texts (I recommend this for all art excursions) to highlight the consistency of aesthetic sustained over the decades on display.

Whiteway could have easily riffed on the plain/plane homonym with her artists’ sustained emphasis on the level landscape and flatness of the art (particularly painting). I haven’t been to Saskatchewan, but I’ve heard enough to know the horizon is an inescapable part of the experience. Combine that with a visit from the majordomo of American modernism Clement Greenberg recounted in the pages of the Spring 1963 issue of Canadian Art (included in the exhibition) and you set the stage for Roy Kiyooka’s abstractions, Theodore Wan’s conceptualism, and Edward Poitras’ post-minimalist, politically-charged actions. The latter’s 1988 Offensive/Defensive adds colonial history to the landscape/modernism binary by turning a strip of replanted grass into a searing evocation of land theft and land rights. More recent works by Tammi Campbell and Dagmara Genda add a postmodern spin to the proceedings with their self-aware backward glances.

Both exhibitions give you plenty to look at, so save the reading until later. There is also a solo exhibition by Abdi Osman that adds intersectionality to the type of photographic portraiture that sees subjectivity as a performance and a series of immersive screening rooms by Carrie Mae Weems that demands an entire afternoon of viewing. The quality of these shows and their collected heft are as good as any museum experience you’re going to get, so kudos to the curators for making it so.