Socrates shares an anecdote midway through Plato’s Republic when he’s trying to explain moral indignation. He describes someone happening upon a pile of fresh corpses who then wrestles with the conflicting impulses to a) look away in disgust or b) stare directly at the horror before him. In the end, he looks and exclaims, “There you are, curse you – a lovely sight! Have a real good look!” 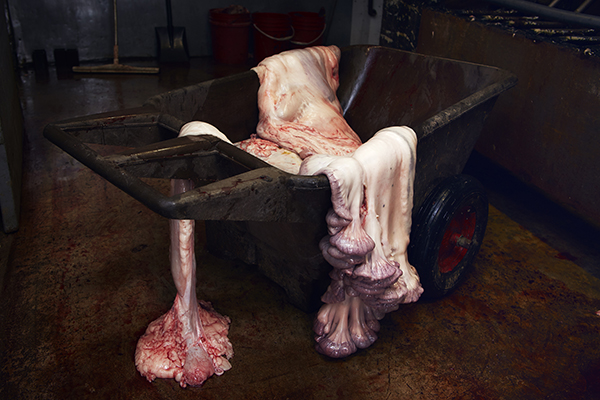 A similar combination of temptation and repulsion greets each visitor to Chris Curreri’s current exhibition at Daniel Faria Gallery. His photographs of animal innards hanging in gelatinous, visceral, ballooning, and marbled masses are the kind of sights that can’t be unseen. There is an alien quality to them in the H.R. Giger Alien sense where fictional extraterrestrials have stopped being a reflection of our technophobia/philia and instead dredge up from the depths of our psyches a body-horror that leaks, infects, and mutates like a spore-spewing cracked egg. After a moment’s pause and, depending on your constitution, some involuntary gagging, one might even find an abject beauty in these dramatically lit images of gooey guts. It’s not surprising that a return to art inspired by Julia Kristeva’s conceptualization of the powers of horror is happening alongside similar echoes from the aesthetic discourses of thirty years ago. What with all the self-regarding of identity politics, an evisceration of the body as tenuous seat of the self is inevitable. Though it should be noted that abjection in art goes back even further to the sick Surrealist sensuality of Hans Bellmer and Wols.

The Surrealists liked their doubles and Curreri follows suit with a dummy duplicate of himself hanging limp in the corner waiting for a hand to enter from behind and animate him. That breakdown of the hard border between self and other is an ongoing concern for an artist who has more than a few works fixated on orifices. However, apart from a small self-portrait with bubble gum reminiscent of his pizza pie-masked bodybuilders from eight years ago, the last two sculptures hide their bodies to leave any openings up to the imagination. A seated shrouded figure in the back is most mysterious and least provocative. There is nothing to see here, though the dirty rug that covers this ventriloquist evokes a more sordid version of the man-behind-the-curtain archetype. Splayed out front and centre on the gallery floor is a body-less quartet of limbs linked by chain to a harness waiting for a missing figure to fill in a literal physical absence. In a neat reversal that takes away everything the photographs provide, this unfinished work invites the viewer to insert their own body into the equation and strap on the prosthetic extremities.

Shame is the flipside of transgression and it’s a tricky balancing act to maintain both effects. In his sculptures and his photographs, Curreri has mastered the art of compelling repugnance. It elicits a sensation familiar to those who love creepy movies as well as those who crave an experience free from the constraints of conservative social orders. The liquidity of his subjects is key as saliva, mucous, and whatever the runny stuff of our inner organs is called steps out of the shadows and into the spotlight, nudging us to accept – or at least confront – the repressed reality of our blatant bodies.