Celia Perrin Sidarous is primarily known as a photographer, but, as the name of her solo exhibition, The Archivist at the McCord Museum, implies, her title could easily be extended to include curator, installation artist, researcher, and archivist. While she has mounted shows that look like photography exhibitions (at least once anyway, at Parisian Laundry in 2018), most often than not, the formal and spatial attention she devotes to the complex arrangement of objects, collages, fabric, hands, and environments within the photographic space is extended to their installation. Curtains, plinths, architectural forms, and, more recently, her own hand-made objects are often as essential to experiencing the work as the photos themselves. The Archivist, curated by María Wills Londoño in collaboration with Audrey Genois and Maude Johnson for the MOMENTA 2019 Biennale, is no exception. 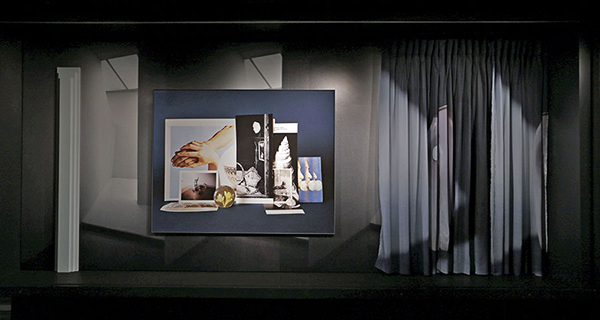 An example of the kind of complex layering characteristic of Perrin Sidarous’ work is the installation of three pieces: Assemblage en bleu (Sphinx), a framed photograph of assembled materials that includes several magazine clippings with aesthetic references spanning multiple decades, and one decorative glass paperweight; Solomon R. Guggenheim Museum (repetition), a black and white architectural photograph of a window, presumably in the Guggenheim museum’s interior, repeated three (and a half) times, printed on vinyl and mounted like wallpaper; and Blue vessel with aperture, a photograph, possibly depicting a vase in a shadowy room, printed on Georgette fabric (named after a French dressmaker from the early 20th Century) and hung like a curtain. Completing the installation, Perrin Sidarous incorporates what looks like an Art Deco relief-style column. Time is pastiched in the contorted material and stylistic layerings, and yet it manages to feel completely natural.

As a participant in the McCord’s longstanding artist-in-residence program, Perrin Sidarous was invited into the museum’s archives where she selected objects to respond to and incorporate into her exhibition. She pulls objects into her photographic assemblages in a manner familiar to her practice, but also works with them in a more classically museological framework, exemplified in A research panel I (catalogue and storage) and A research project II (catalogue and storage). This is an interesting decision, and one that fits well with the artist’s and exhibition’s proposition that objects have lives. If in Perrin’s assemblages, objects feel beloved, intimate, tended to, then in their “catalogue and storage” context, they feel kind of like a dog abandoned at the SPCA, isolated and devoid of regular care or a context of use-value that might further animate their character. 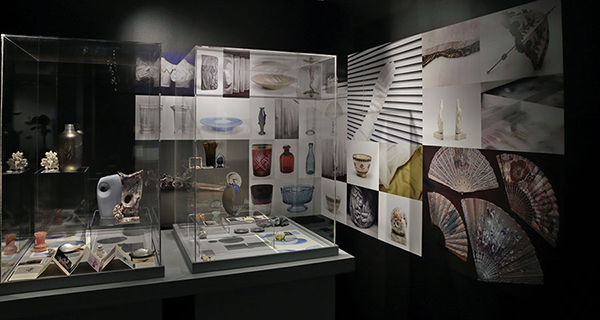 As a researcher, Perrin Sidarous lives in the world of objects, which, though inanimate, she believes have rich “lives” of their own, a kind of invisible history that drives her investigations. As an archivist, she has  strategically tapped into networks of artist residencies that take her to many parts of the world, from which she has built up a personal archive of objects and images that she can activate and draw meaningful associations between. As a curator, she takes on the responsibility of asking questions of a collection that will activate it and give it relevance, whether it is a formalized one like the McCord’s, or the informal collection that she has built up over the years. While Perrin Sidarous works within the potentially dangerous playground of collecting, burdened by histories of colonialism, control, and conquest, her irreverence to order, and regular – if often unnoticed – references to the Mediterranean, where she has familial links, allow her to be in but not of this messy representational tradition.