Border Cultures: Part Three (security, surveillance), the final iteration of the Art Gallery of Windsorseries by curator Srimoyee Mitra, takes on a vast range of issues related to agency, violence, and the effects of surveillance on internal and external boundaries on, along, and across borders. For her, the three-part project “conceptualized as a research platform” has been a call to artists to take on broader experiences of/on borders, culminating here in a bridge from “the materiality of the border to a psychological and intimate space of despair, hope and desire.” The resulting exhibition includes many strong works that are often (and deliberately) meandering in their complexity. 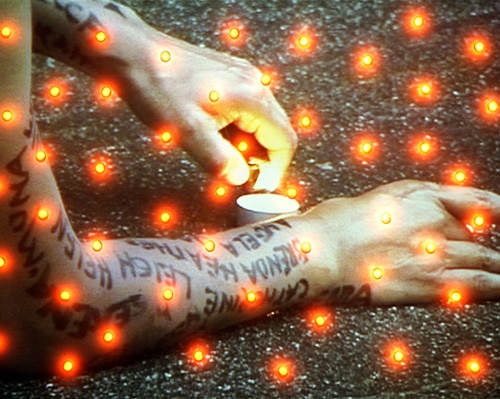 Rebecca Belmore, The Named and the Unnamed, 2002

A large part of such meandering is in the nature of work which has a kind of bottomless sense of investigation, such as Trevor Paglen’s large-scale installation of code words based on classified military and intelligence activities in the US, or Chitra Ganesh and Mariam Ghani’s physical and interactive archive of post-9/11 disappearances. Less overwhelming are Shelagh Keeley’s series of photographs and drawings based on her travels to Timbuktu in the 1980s, which are juxtaposed with newspaper articles on the more recent aftermath of Timbuktu after the 2012 siege of Mali. From this more personal and somewhat vague angle, Keeley’s photographs and drawings allow glimpses of exterior and interior architecture later destroyed or ransacked. Bambitchell’s Border Soundsconsists of musical tracks that conceptualize personal histories of passports from Canada to Pakistan and Israel. Links can be made between restricted versus unrestricted citizen mobility to listener mobility via the length of headphone cords, although this may be lost on those more (or less) inclined to spend time listening through each track.

More concise but no less complex is Osman Khan’s multi-part installation consisting of the two works Will you be my Palestine? and The Partition Line (Radcliffe Line). Here, the real mapped line dividing India and Pakistan – a line which “recast histories of colonialism and split a nation” – is visualized as the instruments of mapping (“the real tools of violence”) and as a long pencil line upon the wall. For Khan, the gesture of the wall drawing speaks of temporary agency and starting over. A pile of bright orange shirts sits near an issue of Newsweek depicting a crowd of men designated by the words “MUSLIM RAGE”. The immediacy of this headline is not unlike the shirts’ immediate signals to incarceration. Nearby, a barrier of grey partitions is linked to the West Bank wall or “fence of separation” between Israel and Palestine. There is much more to consider here, with further connections between a video of a tethered fly’s “borderless” state, a stack of tally marks, and the sound of Chet Baker.

Another key work is Hito Steyerl’s video Is The Museum a Battlefield?, a lecture and video essay originally recorded at the 13th Istanbul Biennial. Using a faux-naïve and matter-of-fact voice, Steyerl builds looping conspiracy-like theories of the art world’s participation in war and violence such as the fact that the Biennial, whose sponsors are also manufacturers of military hardware, coincided with finding a shell casing which, because of its mysterious origins, must have traveled across several states of matter (via a data cloud) and circled around its target in the same style as the bullets failing to hit Angelina Jolie in Wanted. Many similar climactic points are made throughout, all with deadpan seriousness.

In an accompanying panel discussion, a question was posed to the artists: How can the exhibition take such general positions on such jagged and violent histories? Responses included suggestions that the work offers strategies of disarmament, transmits a sense of complicated experiences, can be a catalyst to provoke change, and creates counter-actions through abstractions. Other artists responded with more questions: How do you record or visualize a moment of resistance? How do you bring one space in time into the space of another?

Mitra spoke of a particular work as a point of departure for the exhibition, a work that speaks of “an internal border known and unknown.” Rebecca Belmore’s video installation The Named and Unnamed is based on Vigil, a performance from 2002 as a commemoration of women, mainly Aboriginal, who have been killed or are missing from Eastside Vancouver since the 1980s. My own experience of the exhibition also leads back to this video and its audible reach into and across the boundaries of other works. The pain and grief of names called and cried, the pulling of clothes away and out of the digging of nails without relief or end, the gravity of Belmore’s stillness, and the heaviness of looking become raw facts. Belmore’s performance – the series of rituals, the gesture of tribute and calling of names – was and is an absolute, mundane task that continues. The task of getting on with it. And it feels like the kind of counter-act that seems to cut through the very idea of act and counter-act by its very real ache.

Kim Neudorf is an artist and writer currently living in London, Ontario. Her paintings have shown widely in Alberta and at Susan Hobbs Gallery in Toronto. She has contributed writing most recently to Susan Hobbs Gallery, Cooper Cole Gallery, Forest City Gallery, and Evans Contemporary Gallery. She is Akimbo’s London correspondent and can be followed @KimNeudorf on Twitter.