In colonial Burma, a thirty year old woman named Ma Nge was found guilty of having sexually transmitted an illness to an officer of the British East India Company. Her punishment (flimsily justified as a public health measure) was to be tattooed on her forehead in black with the label “bazaar prostitute.” In quiet defiance, the Burmese tattooist ordered to do the court’s dirty work used vermillion instead of black ink, and concentrated his points in the middle of her forehead, thereby converting a punitive mark of colonial authority into a traditional Buddhist love charm.

For UK-born Indian artist Bharti Kher such struggles over women’s bodies are not so safely behind us. In Points de départ, points qui lient at DHC/ART, Kher pictures a world in which victims of sexual violence take up positions alongside a Hindu goddess, a phalanx of New Delhi sex workers, and a gigantic whale heart on the frontlines of the global fight for environmental and social justice. Worn mostly by Hindu and Jain women on the forehead as a “third eye,” the bindi’s various meanings as a cosmological sign, an apotropaic device, and a mass-produced consumer good are gathered in Kher’s works. A little like the Burmese tattooist, she critically redirects this and other charged signs to visualize postcolonial relations, mass migrations, and the mixing of the world’s biota that characterize our epoch. 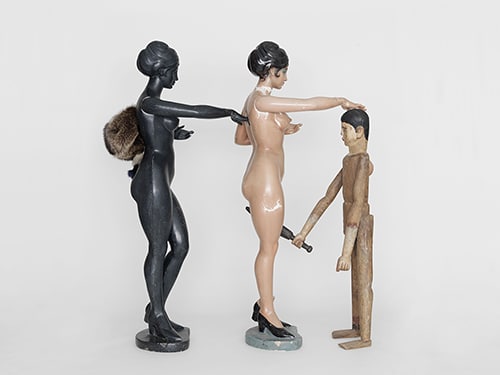 Kher’s imposing sculptures of women are lynchpins in the exhibition, driving home its strong feminist messages. Mother and Child includes a wood figure of a machete-wielding boy facing a partly dismembered, olive-skinned mannequin and her black shadow. The piece mixes a rough folk-art style with the polished beauty of a Bollywood starlet, but Kher’s main reference is the 2012 gang-rape and murder of Jyoti Singh Panddey by fellow passengers, including one juvenile, on a bus in South Delhi. In a healing gesture, the mannequin’s left breast is severed and placed on the boy’s back as a “seed of compassion and empathy.” While this well-known case galvanized a popular movement against rape culture in India, Kher’s Six Women sheds light on the anonymous toil of sex workers in Kolkata. Seated with closed eyes and hands placed on their laps, the women are presented in a meditative state, allied and withdrawn from the dangers of their trade. In Cloudwalker, a Hindu goddess loosely draped in a sari and holding a rake secures an ancient pedigree for the Indian feminist movement Kher’s art animates.

In the exhibition’s remaining works, South Asian women’s adornments are used to extend these sculptures’ mute protests. Loosed from their usual bearers, bindis appear on the surface of a scale-model whale heart (a symbol of endangered love), or on pages from an old French atlas. Resin-locked saris are shown wrapped around plinths or fallen down stairs salvaged from old Indian homes. The works on maps, aptly titled Points of Departure I – XI, capture the geopolitical and historical scope of Kher’s vision, linking the interests of Indian feminists to international movements for environmental and social justice. Behind organic, geometric, or radiating arrangements of bindis, the images of a 1947 Larousse atlas impose a graphic intelligibility onto a planet in disarray, reeling from the horrors of WWII and courting a string of environmental catastrophes in the latter half of the 20th Century. The bindis mimic and transcend the maps’ agricultural, industrial, and political orderings of the world. In an especially poignant one of Eastern Mediterranean imports/exports, spermatozoid-shaped bindis drift across the sea from the Middle East, foreshadowing the diaspora of Palestinians after the 1948 Nakba and the refugee crises of the last several years. The publication of the atlas also coincides with the year of Indian independence, which adds a note of hope to the series. 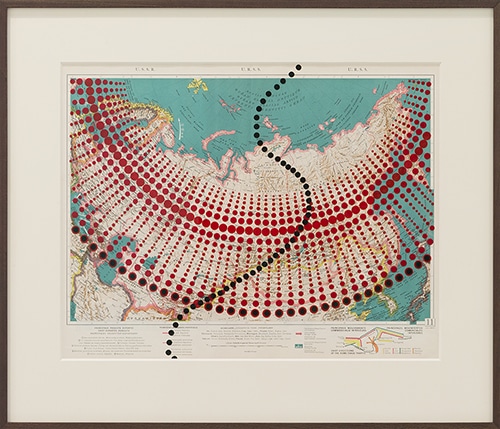 Kher comes across as an astute observer of world history and an artist-seer. Her predictions contained in a piece called Virus IX (2010 – 2039) include the release of Freud’s complete letters and Elvis Presley’s autopsy report – slim consolations in a future that also holds “a South Asian refugee crisis, the EU’s collapse and the sinking of Bangkok.” The list, like her other works, joins natural and human history in a story of the planet’s and the human species’ shared fate. In his study of the “social lives of things,” anthropologist Arjun Appadurai notes a family resemblance between goods as they move in and out of commodity status, and the biographies of persons. Kher takes up his challenge to “follow the things themselves” transculturally as she tracks the movements of human and non-human things along well-trodden paths of the colonial era and after. We see bindis converted from sacred signs to mass produced adornments to stand-ins for migrant communities, and the commodified women of Kolkata’s red light district are rescued from their market, if only imaginatively in the space of the exhibition. That Kher was apprehensive about engaging these women in yet another “transaction” indicates how closely linked people and things are in her work, and in the contemporary art milieu.